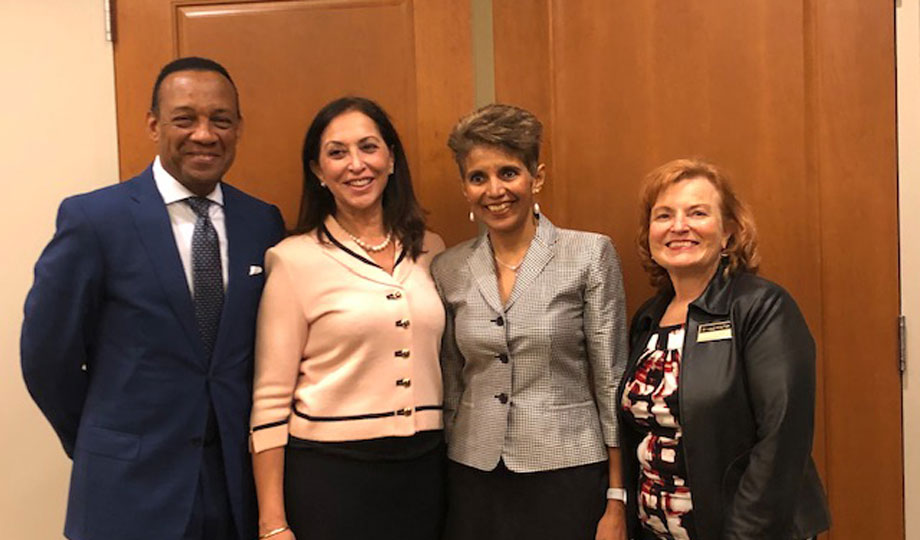 The College of DuPage Women’s Studies Committee honored Diana Martinez and Rita Hassert as the 2021 and 2022 Woman of Distinction, respectively, during a recent reception on campus in Glen Ellyn.

Martinez is director of the McAninch Arts Center (MAC) at COD. She began her professional career as the director of entertainment and marketing for Pheasant Run Resort in St. Charles before becoming executive director at the Paramount Theatre in Aurora. Named the interim director of the MAC in 2013, she oversaw its re-opening following a $35 million, 14-month renovation. Martinez became director in January 2014 and, since then, has diversified programming through the oversight of a free outdoor summer festival and the expansion of the Cleve Carney Museum of Art (CCMA), where she served as the executive director for the multifaceted exhibition “Frida Kahlo: Timeless.” She is currently working on the “Warhol: A Life in Pop” exhibition scheduled for summer 2023 at the CCMA.

Holding an M.S. in Library and Information Science from the University of Illinois, Hassert is the library collections manager at the Sterling Morton Library of The Morton Arboretum, where she has worked since 1986. Hassert immerses herself in developing ways to increase access, visibility and searchability of the items in the library’s collections through various digital tools. She believes in the importance of capturing, sharing and telling stories about the Arboretum's founding and development and is a founder of the library’s book discussion group, “Leafing Through the Pages,” as well as the Arboretum’s Chamber Concert Series.

The Woman of Distinction Award, given annually since 1983, recognizes residents, workers or volunteers within Community College District 502 who have made significant contributions to the personal and professional advancement of women through education, advocacy and motivation. The reception, held on Nov. 3, also featured keynote speaker Sania Irwin, senior vice president of engineering and impact at EagleRail, who was named the 2020 Woman of Distinction.