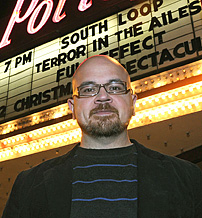 As far back as he can remember, John Rangel had an appetite for movies.

"As a kid, my family would go to matinees and the drive-in seemingly every week," he said. "But my interest in making movies was born when I realized the ideas and thoughts I had could be expressed through movies. I never thought a movie could be made by or about a working class Latino kid from Aurora."

Rangel planned on a career in filmmaking. However, while producing his graduate thesis film, he started substitute teaching in his old school district in Aurora as part of his research for the movie. One of his former high school teachers asked if he would teach math on a full-time basis for one semester. Rangel accepted and found the experience rewarding.

"I was helping kids who were struggling with math, and for many it was their last hurdle before graduating. I took great pride in not just passing them but they actually learned the material. So they ended up moving past high school a little better equipped to realize their potential."

Rangel then taught screenwriting part-time at Columbia College Chicago, Story Studio and Facets Multimedia before coming to College of DuPage. He still pursues filmmaking and has completed two features, "south loop" and "The Girls on Liberty Street," the latter of which he filmed in Aurora. He eagerly looks forward to new films from his favorite filmmakers, such as Claire Denis, Terrence Malick, Wong Kar-wai, Abbas Kiarostami, Hou Hsiao-Hsien, Frederick Wiseman, Paul Thomas Anderson, Mike Leigh and Richard Linklater.

But he equally loves helping students as they learn about the art of making movies.

"What I try to instill in my students, more than anything else, is twofold," he said. "To thrive in the creative arena of cinema, the two qualities that matter above all are voice and drive. You have to articulate something specific from your personal perspective to distinguish yourself from the sea of pastiche and redundancy. And you have to want it more than anyone else. All the filmmakers my students love are talented but they are also undying in their pursuit to make movies. Talent means nothing without the burning desire to share your perspective with the world.

"Every semester, without fail, my students bring ideas and perspectives I couldn't even fathom, and it is entirely inspiring to watch them turn those things into movies. And the best part is when the movie plays in front of the class. I always keep a close eye on the student whose film we're watching and I see that all-too-common anxiety that comes with baring a piece of your soul with the world. But, in that case where the movie really works, I see their anxiety wash away as they realize their classmates love it. That look of pride, of taking an idea and turning it into a series of images and sounds and making it work, that's why I teach."