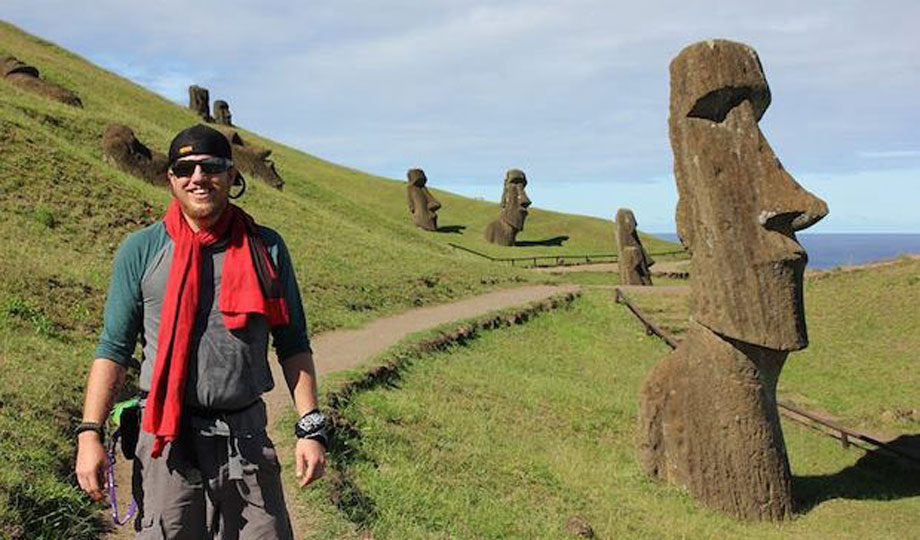 Dale Simpson Jr. has dedicated much of his adult life studying the intricate history of Easter Island.

Easter island, called Rapa Nui in the local language, lies 2,300 miles off the coast of Chile and has long been seen as a mystery. Scientists have hypothesized that a Polynesian society built complex villages and monumental centers, carved and erected nearly 1,000 full-body statues averaging 13 feet tall, and then destroyed their own society through warfare, cannibalism and over-exploitation of resources.

For two decades, Simpson has traveled to the island, living there for up to two years at a time, studying the Rapa Nui culture to take a closer look at the history that has been written about the collapse of this remote Polynesian island.

“There’s so much mystery around Easter Island because it’s so isolated, but on the island, people were, and still are, interacting in huge amounts,” Simpson said. “People take small pieces of data and like to make grand narratives, but we need to see people for what they really are. That’s why I’ve been so invested in finding out the real story behind Easter Island.”

When Simpson started his Ph.D., he set out to investigate this long-standing narrative of Rapa Nui’s collapse. He began working on the Rapa Nui Geochemical Project with Marshall Weisler, the head of the Archaeology Department from the University of Queensland, and scientist Laure Dussubieux from the Field Museum, along with more than 30 collaborators from 20 institutions around the globe.

They published their ground-breaking findings in the Journal of Pacific Archaeology hypothesizing that the Rapa Nui people were much more collaborative and interactive than scientists originally believed.

Simpson said the first people arrived on Easter Island about 900 years ago with the population rising into the thousands. Over time, the Rapa Nui people formed a complex society that carved nearly a thousand statues, or moai, representing prominent Rapa Nui ancestors.

“The moai’s utter size and number is suggestive of a complex, sophisticated society,” Simpson explained. “There was a certain level of sociopolitical organization that was needed to carve almost a thousand statues and the platforms, or ahu, they go on.”

While the society was later devastated by colonists and slavery, Rapa Nui culture has persisted and Simpson has seen this first-hand as a frequent visitor and resident on the island.

“Easter Island is a great case study of humanity,” Simpson said. “In the middle of nowhere, these individuals created one of the most famous megalithic cultures of the world. And now, there are more than 100,000 tourists who visit the iconic statues today.”

It was easy for Simpson to decide upon a teaching career—it’s in his blood. Combined with his love for travel and a passion for understanding the people of the world, teaching anthropology was a natural fit.

“I’m a local boy with global aspirations,” he said. “I've been around the world a few times, and it’s opened my eyes to how lucky we have it here. I want to make a difference within a global context and show people how we can help others.

“Plus, teaching is in my blood. My father taught HVAC here at College of DuPage, and my aunt and uncle were teaching here when the first buildings went up.”

Simpson’s fascination with Easter Island began his junior year of college at the University of Manitoba after reading an article by Jared Diamond which presented a distressing version of what transpired on the island. His senior year of college, he needed to enroll in an archaeological field school, and in what Simpson said was fate, the University of Hawaii offered a program on Easter Island. Simpson packed his bags in 2001 and hasn’t looked back.

While working on Easter Island or on other fieldwork projects around the world, Simpson teaches online Anthropology classes at COD, sharing his experiences with his students from aboard.

“It’s so important that I use this opportunity as my teaching points and let my students see me doing real work in the field,” he said. “I’ll send my students weekly updates from the field of where I’m at and what I’m doing. I get so much engagement from those posts. The best is when students relate what I’m doing to something they read in their textbook or see in our class material. It’s rewarding to see them connecting the dots on their own.”

His goal as a teacher is to share his passion for anthropology with his students and get them to think globally.

“We can solve our problems by looking at other cultures’ problems and seeing how they solve them,” he said. “We just have to have that cross-cultural awareness. And that’s one thing I always try to put forward and tell my students, that you’ll know so much more of your culture, by experiencing and learning about another.”