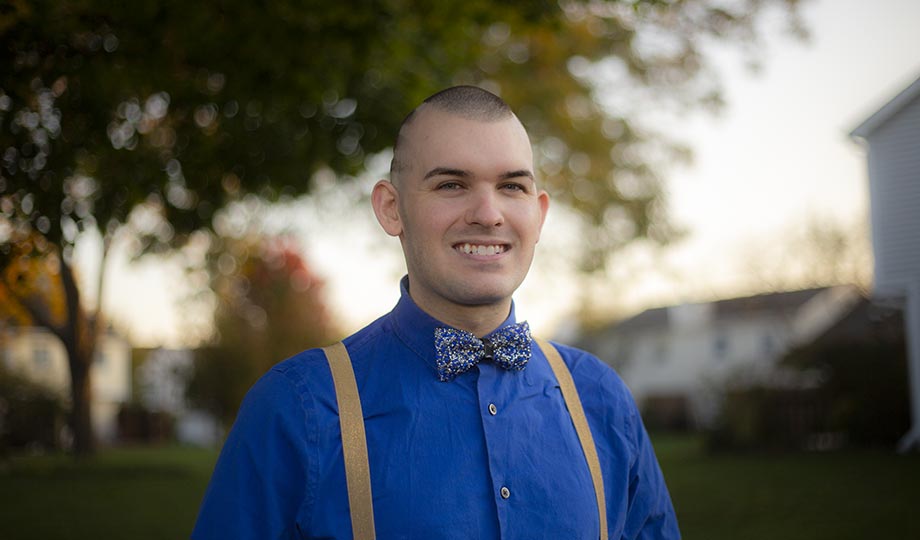 In his role as an academic assistant and tutor in the Learning Commons at College of DuPage, Brian Kapustka works directly with students to ensure their academic success in the classroom and beyond.

He provides guidance to students in foreign language and linguistics classes, as well as non-native English speakers in the College's English Language Acquisition program, by supporting them through a variety of formats, including scheduled one-on-one appointments, small student groups and weekly drop-in sessions. He also has directly assisted in training and mentoring for fellow tutors and the development of the tutoring program.

Kapustka said helping students be successful in their classes is incredibly rewarding.

"It's an amazing experience to share my knowledge and inspire students to further their studies and help them overcome challenges," he said. "To witness their growth from the start to the end of the semester is so rewarding to me. It's wonderful to see that I can have such a positive impact on people's lives."

In his role since 2014, Kapustka works closely with faculty to ensure he knows the material and their expectations. He also offers extra insight into the topics he covers.

"I work with students on what they need to know for the class, but also I show them how they might encounter language in everyday usage," he said. "It's great to provide students with the tools to make their education as enjoyable and applicable in the real world as possible."

Kapustka first became interested in foreign languages after taking a Spanish class as a freshman in high school.

"I really enjoyed the class and caught on quickly," he said. "I was inspired and encouraged by one of my teachers to continue in language classes. By the time I was a junior, I realized I wanted to pursue a career in that area."

It also was during high school that he developed an interest in teaching while acting as an unofficial language tutor. He said he enjoyed the opportunity to share his knowledge, help others and engage with his fellow students.

After high school, Kapustka enrolled at COD and credits the faculty members who provided support and inspiration as he pursued his interests and passions. Specifically, he thanks Professor of English Language Studies and Linguistics John Stasinopoulos for igniting the passion for linguistics and Associate Professor of French and Italian Mirta Pagnucci for encouraging him to pursue the study of languages.

It's wonderful to see students develop and use language skills. When students share their stories of using what they've learned, it means the world to me.

His involvement in a variety of clubs at the College also contributed to his experience and success as a student. Kapustka was a member of the French and German clubs, was involved with Latino Ethnic Awareness Association, and served as president of the Italian and Spanish clubs as well as Alpha Mu Gamma, the national collegiate foreign language honor society.

He added that his involvement in the clubs led to an especially rewarding experience at COD.

"I and my fellow club leadership members came up with the idea of a collaboration between the language, cultural and ethnic clubs, which resulted in the College's first Multicultural Mashup," he said. "It was not only one of the most fun experiences for me at COD, but it also really solidified elements of what I do in bringing cultures together and providing a more global perspective through language."

After earning his Associate in Arts degree at COD, Kapustka transferred to the University of Illinois at Chicago, where he is completing the final semester of a bachelor's degree program in Spanish with a concentration in Hispanic linguistics and a minor in linguistics. He has applied for a Ph.D. program at UIC that accepts students who have earned bachelor's degrees and hopes to eventually teach classes on a collegiate level.

Of his role at COD, Kapustka also enjoys the combination of the intellectual, social and educational aspects of his work, as well as the opportunity to make people more culturally aware.

"There's really not anything like it," he said. "It's wonderful to see students develop and use language skills. When students share their stories of using what they've learned, it means the world to me. I'm helping them but they help me become a better teacher and person. I wouldn't trade that for the world."