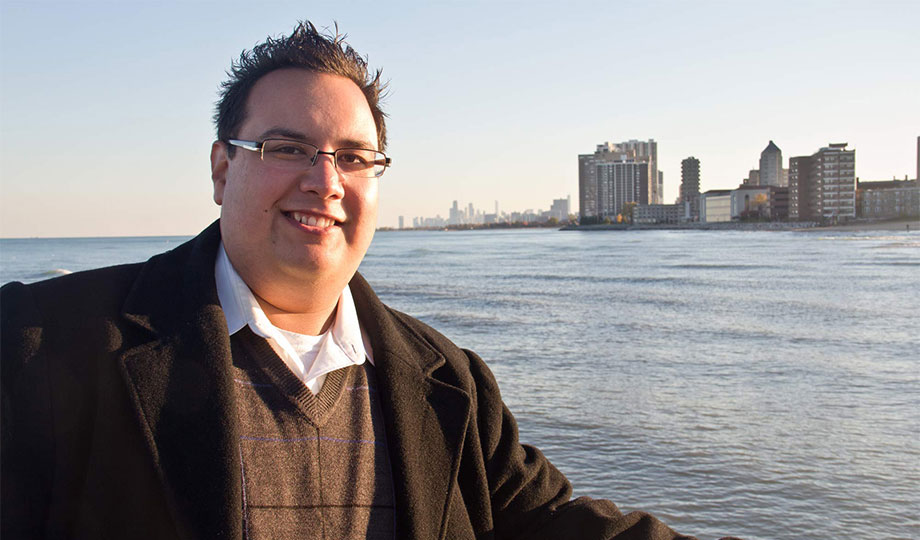 David Baker couldn’t ask for a better education than the one he received while a student in College of DuPage’s Motion Picture/Television program.

“The department is set up so that you can get exactly what you want out of it,” he said. “The teachers are willing to offer their advice, but they also are willing to step aside and allow you to figure it out on your own if you so choose.”

During his time at COD, he took a special project class that resulted in two teams creating manufacturing career videos for the DuPage Workforce Board. The project helped Baker learn the importance of group dynamics.

“I was the producer for one of the two teams,” Baker explained. “My job was to be the central hub between the clients, participating companies, my group and the faculty advisors. I was in charge of scheduling the interviews, shoots to capture footage from the floors of the companies, and mapping out the group’s goals for editing, graphics, audio and delivery.

“The timeline for this project was pretty short, so that required us to vigorously plan everything ahead of time while keeping a flexible mindset to allow the creative process to flourish, not to mention deal with the inevitable, unexpected hiccups all projects naturally experience. The group’s ability to work together was far more important than the individual’s talent in the quality of the final outcome.”

Baker, who graduated with an associate’s degree in Film/Video Production, freelances full-time mostly with commercial work, educational jobs and mini-docs. Highlights include working as editor/associate producer for the feature-length documentary “Lakay,” which is about two brothers journeying back to Haiti after the 2010 earthquake to find their loved ones. “Lakay” was accepted into the Harlem International Film Festival, the Haiti Film Fest and the San Diego Black Film Festival, where it won “Best Cutting Edge Film.” The film was also nominated for Best Documentary at the Haiti Movie Awards. It is now available on DVD/BluRay.

He spent seven months as DIT/second shooter/AC on “Wrench’d,” a car build show now playing on Motor Trend. He also edited an announcement of a partnership between US Foods and Food Network Chef Marcus Samuelson and season 2 of “VC: The Web Series”; was B-roll camera operator for the pilot episode of HGTV’s “Chicago Flippers”; and was the production assistant on “Death Wish” starring Bruce Willis. He has worked, mainly as an editor, with U.S. Foods, Deloitte, IHOP and Northwestern University.

One latest venture was editing a video promoting former Chicago Bears player Charles “Peanut” Tillman, who built his own row boat to row across Lake Michigan for charity; editing videos that served as the backdrop for Mike Love of the Beach Boys during a recent tour; and working with Bacardi.

Other recent credits include assistant editor for “Jeff’s Homemade Game Show” on BYUtv and editing the feature film “Ghostwriter,” which made its world premiere in 2021 at the Dances With Films festival.

Baker thanks College of DuPage for providing him with a great start.

“I really enjoyed my experience in the MPTV department,” he said. “While this specific project proved to be extremely frustrating at times, in hindsight I learned a lot from it. I gained a solid foundation that I use to succeed out in the workforce.”