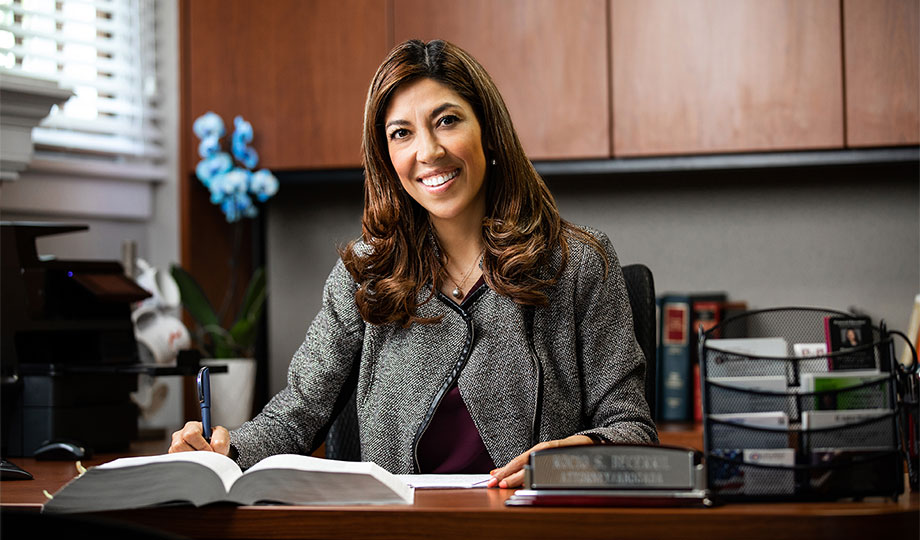 Rocio Becerril was the first generation in her family to attend college.

She had no idea where to go or what her major would be, but it felt like a natural step to take right after high school. Becerril decided to enroll at College of DuPage.

“COD helped me tremendously as I tried to figure out what I wanted to do,” she said. “It’s hard going to college, especially when everyone else knows their major right off the bat and you feel pressured having to make that decision from the beginning. Going to COD allowed me to take several different classes to try and find myself and to figure out what I really wanted to do.”

While at COD, Becerril participated in the Disney College Program, through which she worked at Walt Disney World and lived in Orlando, Fla., for eight months. It was an “absolutely amazing experience.”

During her MBA program, she took a course in business law and found it so interesting that she enrolled in law school at Northern Illinois University College of Law. Becerril thought she would combine her MBA with a law degree and took courses in business, including corporations and taxation.

Going to COD allowed me to take several different classes to try and find myself and to figure out what I really wanted to do.

By the end of her third year in law school, she had taken an immigration course and fell in love with immigration law, which is now the focus of her own law firm which she opened in 2012.

Becerril has two offices – one in Chicago and one in the western suburbs – and makes many presentations about immigration. She also has been a guest speaker at conferences, colleges, universities, churches, schools, police departments and civic centers as well as being interviewed by Telemundo Chicago and NBC Chicago.

“I want people to know that no matter where they come from, who they are, who their parents are or what background they have, they can achieve a successful education, and College of DuPage can be a basic foundation to that goal,” she said. “I came to the U.S. when I was 10 years old and I did not speak any English. My mother cleaned houses and my father was an upholsterer. Now I have two bachelor’s degrees, an MBA and my law degree and I graduated with zero debt.

“I worked very hard in high school to obtain good grades. I received numerous private scholarships throughout my education. My very first scholarship was from Subway for $500, which was actually through a project our English teacher at Wheaton Warrenville South High School made us do. From there on I obtained scholarships from the National Society of Hispanic MBAs, the Hispanic Scholarship Fund, the DuPage County Bar Association and the Hispanic Congressional Caucus, to name a few. During law school, I remember applying to over 13 scholarships in a single semester! But by working full-time, going to school and receiving these private scholarships, I was able to graduate with no debt. If I can do it, so can you!”

Most recently, Becerril has been active in her community offering free immigration presentations on the subject, “What to do in case Immigration and Customs Enforcement (ICE) shows up on your door,” and was  featured in the Daily Herald about a presentation she made.

Similarly, Becerril participated in Univision Chicago’s phone bank answering questions from the community about raids and was interviewed by Telemundo Chicago about the rights that people have once they encounter immigration and customs enforcement and are here undocumented. She has been recognized every year since 2019 by Attorney and Practice Magazine on its “Top 10 Immigration Law Attorneys in Illinois” list. Finally, for the fiscal year 2019-2020, she was the vice chair for the Immigration Committee for the DuPage County Bar Association, and she became chair in 2020-2021.

Becerril ultimately would like to teach, perhaps after she retires. She considers College of DuPage the best decision anyone can make.

“It’s extremely affordable. You take your basic core classes at COD and then you can transfer to a four-year college,” she said. “COD has flexible classes and schedules that allow you to work and go to school at the same time. COD has the feeling of a college campus but the support of a community college. If I had to do it all over again, I would do it exactly the same way.”