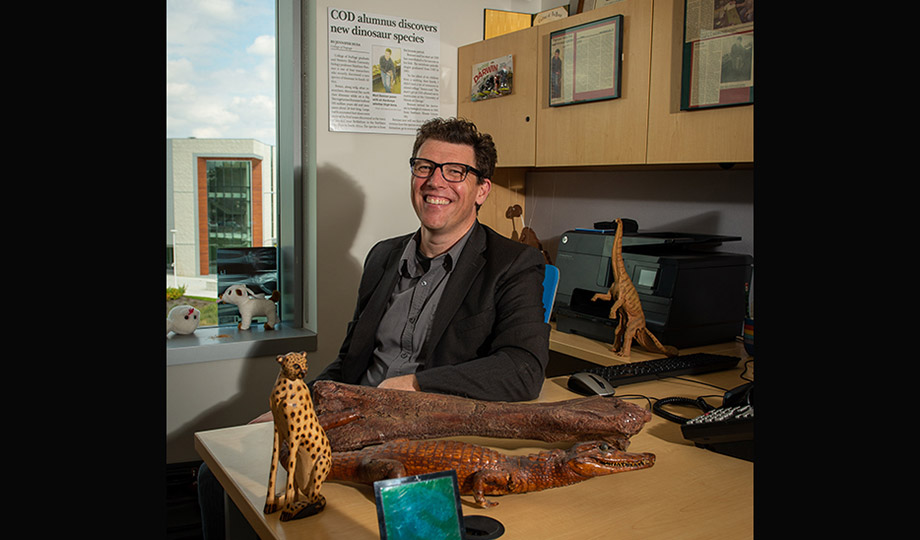 The “earth claw” dinosaur is about 195 million years old and measures about 20 feet long. Aardonyx celestae is a species sauropod, the largest animals to walk on earth. While sauropods reached their pinnacle during the late Jurassic period, little has been known of the species from the early Jurassic period until the discovery in South Africa.

Bonnan and his colleagues published a report on the new dinosaur, called the Pulanesaura, and have since discovered and described two more new species of dinosaurs in South Africa.

These were thrilling achievements and the result of Bonnan’s lifelong dream to work with dinosaurs. The vertebrae paleobiologist said he was a rare individual who knew what he wanted to do from an early age—5, to be exact.

“I fell in love with dinosaurs and the idea that you could find out about animals that lived a long time ago and bring them back to life,” he said. “This feeling grew stronger and stronger as I continued in school and by junior high, I knew I wanted to be a paleontologist.”

Although there are no scientists in Bonnan’s family, he had the support of his parents, who also encouraged him to have a backup plan in case paleontology didn’t work out. Where to start his educational journey was the next question to be answered, and he turned to College of DuPage.

“As the oldest of six children from a working-class family, I didn’t have a lot of resources to attend college, so I did not have a whole lot of choices,” he said. “However, COD was one of the best things that ever happened to me. COD felt very personal, and the professors really cared about you. I didn’t understand the privilege of going to a faculty member’s office or talking to them after class until I transferred and discovered that didn’t happen at other schools.”

Bonnan had just completed an internship at the Field Museum when he arrived at COD, and he found a mentor in Professor Mark Sutherland.

“Mark was friendly and approachable, and I really picked his brain. He nurtured me, which I needed at that time,” he said.

COD felt very personal, and the professors really cared about you.

Bonnan also worked at WDCB, the public radio station located at COD and one of the premier jazz stations in the country. This allowed him to explore music, his other passion.

After graduating from the College in 1993, he transferred to the University of Illinois at Chicago and earned his bachelor’s in Geological Sciences. This was followed by a Ph.D. in biological sciences from Northern Illinois University.

After working as an associate professor at Western Illinois University, Bonnan currently is a professor of biological sciences at Stockton University in New Jersey. He has published a book on the evolution of the vertebrate skeleton, “The Bare Bones: An Unconventional Evolutionary History of the Skeleton,” as well as 20 peer-reviewed articles on dinosaurs, reptiles, mammals and sharks.

In 2016, Bonnan was named one of COD’s Distinguished Alumni. He will always remember the help he received from the COD faculty, particularly Sutherland, and their enthusiastic approach to teaching. In fact, Bonnan models his career on the faculty at the College.

“I want my students to have that feeling I had at COD, where faculty care about students and that they are the top priority,” he said. “Unlike other professors I encountered later at larger universities, Mark demonstrated that good, in-depth science teaching could be inclusive rather than exclusive. Mark showed me that a good professor is a facilitator, not a gatekeeper.”