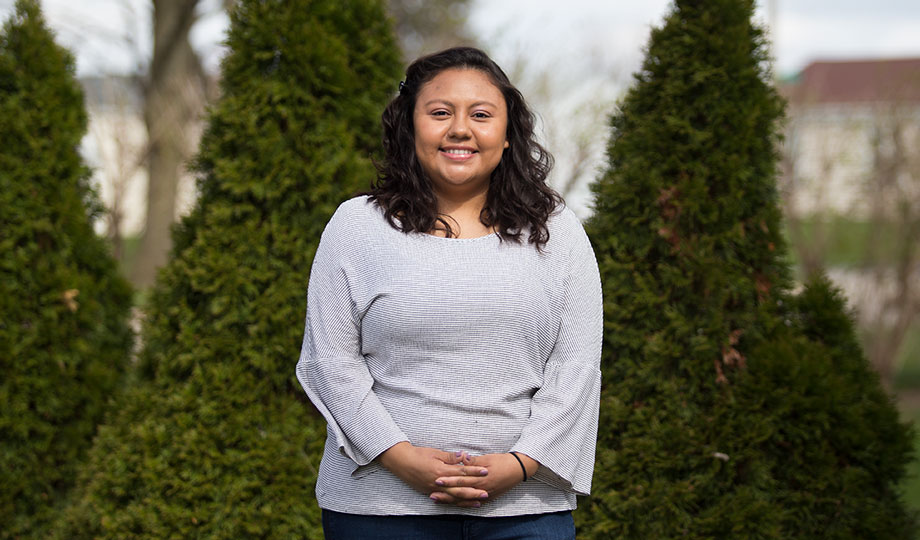 After Pamela Campos sprained her ankle playing soccer in high school, she needed surgery when the injury did not heal well.

This was followed by physical therapy, during which Campos appreciated the skill and care demonstrated by her therapist. The experience influenced her decision when choosing a career.

“I found physical therapy different from other health care careers,” she said. “I liked the hands-on aspect of it and the idea of being there with the patient from the beginning of treatment through to the end. I also liked the physical and emotional healing that a PT can provide.”

Campos attended the University of Illinois at Chicago and majored in Kinesiology with a concentration in exercise science and health promotion. After earning her bachelor’s degree, she applied to graduate school three times to become a physical therapist. Unfortunately, she was rejected each time.

“After three attempts, I hit an emotional rock bottom,” she said. “I tried to look at the positive, but it’s hard to do when you did so many things to improve your application.”

One of those things was getting a job as a technician at a physical therapy clinic for two years. While she liked the setting, it wasn’t the position she wanted. However, Campos worked with graduates from College of DuPage’s Physical Therapist Assistant program and observed the PTAs had better connections with their patients than the PTs.

As a result, she began to see a new career path within the same field.

“I thought of the quote, ‘The definition of insanity is doing the same thing over and over again and expecting a different result,’” she said. “I realized I just couldn’t wait for change to happen. I needed to change my journey, not the destination, and I needed to see that change is not failure but experience.”

Campos came to COD and was accepted into the Physical Therapist Assistant program, in which she was fortunate to develop a close bond with her classmates.

“We not only supported each other academically but also emotionally,” she said. “Some of them went through really hard times and I was truly blown away by how fast our class was able to come together and support one another.”

Clinical rotations gave Campos the opportunity to explore different areas of therapy. This includes neurological rehab, which she had not considered before.

“I love seeing the process of helping patients raise their hand or move a finger,” she said. “It seems like a small goal but for the patient, it’s a huge accomplishment.”

She also enjoys working with children and adults with special needs, which she began doing after her first year at UIC when her parents encouraged her to get a job. Campos became a counselor at a swimming camp and ultimately head instructor for the Western DuPage Special Recreation Association (WDSRA), where she stayed for many years.

Campos is currently working at Northwestern Medicine at an orthopedic clinic, where she loves both her patients and co-workers. She is excited about fulfilling her dream of becoming a therapist.

“When you work with a patient, you need to gain their trust. The key is really listening to what they are saying,” she said. “For example, I can ask how their weekend was. Or, if I know what they were doing that weekend, I can be more specific with my question. That’s how you build a connection. Once this happens, they will express more concerns or feelings that all tie into their physical health. Sometimes you can even incorporate this information into their treatment plans.”

As for College of DuPage, Campos loved her experience in the Physical Therapist Assistant program, which allowed her to work during the day and take classes at night. In 2020, she was named one of the College’s two Outstanding Graduates.

“What I learned in the PTA program is so vast, and every day I was learning something new,” she said. “The professors were there night and day and took their time with us. They really cared and wanted us to understand what it meant to be a therapist. They wanted us to see the person not as a number but as a patient.

“I look back now and, to be completely honest, I think everything happened for a reason. Although not being accepted into PT school really broke me, I say to myself that I was meant to be in the PTA program at COD. It was one of the best experiences of my life and I am truly lucky to call myself a Chaparral!”