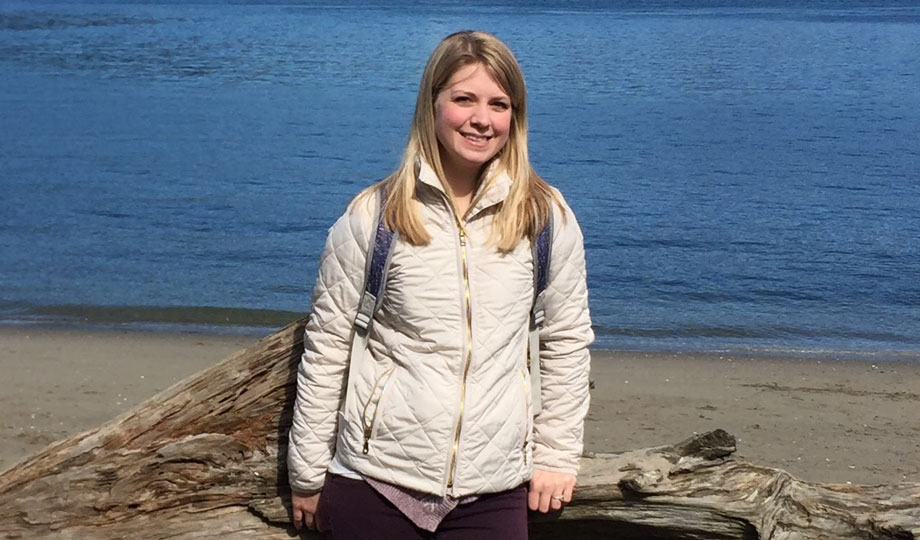 Sharon Grimm decided to attend COD because she had no direction.

“I had college credit from both Southern Illinois University Carbondale and Blackhawk College but no degree,” she said. “I’m the kind of person who says ‘yes’ to everything. At some point, I realized how unhappy I had become in my work, so I finally decided to say ‘yes’ to myself. College of DuPage was close, and it seemed like a fresh start.”

While Grimm always had a passion for people and service, she really had no idea what anthropology was until attending COD. During her first semester, she enrolled in a career development class with Professor Danice McGrath and learned anthropology might be a good fit. McGrath encouraged her to enroll in an introductory course with Professor John Staeck the following semester.

After that first class, Grimm took as many anthropology courses as possible. She also had the opportunity to work with Professor Derrick Willis and classmates Allen Garza and Amber Julius on a semester-long research project, “Navigating the Community College Library in the 21st Century,” that led to presenting at a national conference in Vancouver, British Columbia.

“Most students don’t get the chance to be a part of research projects at this level until they are working on a master’s degree,” she said. “Dr. Willis’ expertise and guidance was invaluable, and I cannot express enough gratitude for what he showed us in that class and beyond. The work we did as a team allowed us to not only study what was happening in the community but also to problem-solve and be part of something larger aimed at making our community a better place.”

After submitting its work to the Society for Applied Anthropology (SfAA), the members were invited to present their findings at the SfAA’s 76th annual conference. While Grimm has some anxieties when it comes to public speaking, she found the experience rewarding.

“When you’re engaged and passionate about knowledge gained, it’s very easy to share it,” she said. “It’s difficult to describe how being part of the research team changed my life. This research project showed me what a career in anthropology might look like—it was doing something that mattered.”

Grimm received her Associate in Arts degree and transferred to Beloit College, where she worked as a teaching assistant for two different departments and completed an independent research project for a third. She also encouraged students who were from the Chicago area to take classes at COD.

The opportunities afforded at COD are unlike any school that I have attended, before or since.

After earning a Bachelor of Arts degree in Anthropology, she took several months off to spend time with her family before starting a serious job search. Her love for research and community led to Rush University Medical Center's Institute for Healthy Aging, where she currently is an associate clinical research coordinator for PORCH (Parent Offspring Resilience and Cognitive Health Study). The study is an offshoot of the Chicago Health and Aging Project (CHAP), through which 10,000 senior citizens on the south side of Chicago were interviewed.

“Some of the unique features of the PORCH study include a second generational cohort of people living in communities with a large number of underrepresented and understudied minorities, approximately 50 percent African Americans, with equal representation of approximately 50 percent women. I am honored and thrilled to be a part of the PORCH study, and I can honestly say my path would never have gone this direction if it weren’t for my time at COD.”

Grimm points to all of her professors in COD’s Anthropology program and said their love of teaching and level of investment go far beyond the classroom.

“Ashton Spatz taught me to be curious and look under the surface to find deeper meaning in course materials. Dr. Staeck pushed me to do extra credit and introduced me to Beloit College. Dr. Michael Dietz set aside time outside of class to help me choose the school where I would earn my bachelor’s degree and to have compassion for my peers and non-human primates. Dr. Alex Bolyanatz encouraged me to study what I love and be intentionally interdisciplinary. Dr. Willis offered me the opportunity of a lifetime to work with a true team and be a part of a research project from the ground up. He showed me that what is learned must be shared. I carry all of these things I learned from the wonderful people I encountered at COD, and I treasure them dearly.”

Grimm’s ultimate career goals include designing and coordinating research projects while giving back to the community, which most likely includes pursuing a master’s and possibly a Ph.D.

As for COD, Grimm said her experience was about more than a degree.

“It was about merging my personal and professional goals to do something that mattered,” she said. “When I first started school at COD, I was lost. I just knew that I wanted to find a life path where I could merge my passions with my career. COD helped me to take the steps to reach that goal. Also, I never would have been able to attend COD without the support of my partner, Drew. He believed in me and made it possible for me to step away from work and devote myself to education full time.

“My entire experience at COD helped to shape who I am as a person. I found a confidence in myself that would carry into earning a bachelor’s degree and continuing to a rewarding career in research. The opportunities afforded at COD are unlike any school that I have attended, before or since. It’s not just that you have incredible resources, a gorgeous campus and an easy commute. It’s the people there and the sense of community that make COD such a great place. COD changed my life for the better, and it will change yours, too.”

Learn more about the Anthrpology program at College of DuPage