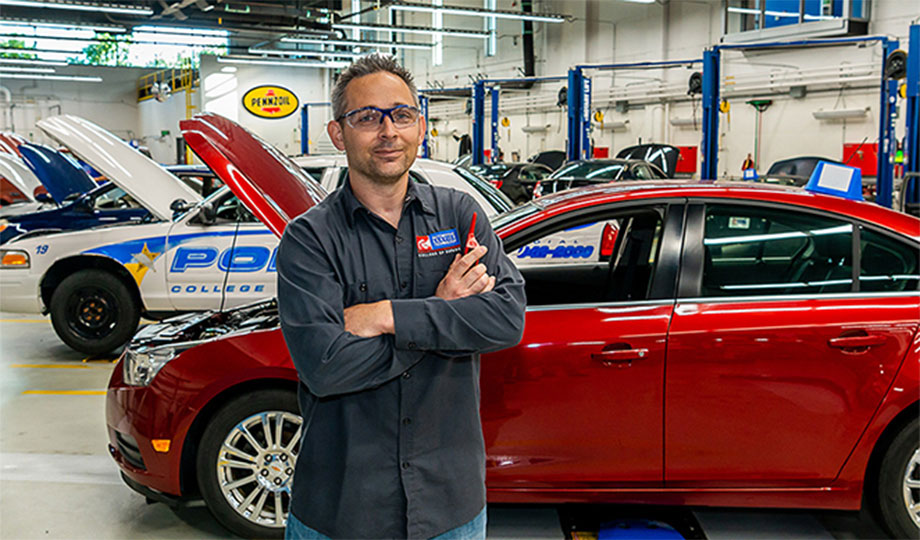 Ben Pohl has always had an interest in cars and in how things work.

This interest became a passion when he spent his sophomore and junior years in high school working with his father on his first car, a 1973 Volkswagen Super Beetle that had sat unused in a barn for 15 years. While his friends went to sports practices after school, Pohl rushed home to work on the car, even entering the Army National Guard early and pouring all of the money he earned into it.

All that time, work and money would lead indirectly to a life-changing event.

"I crashed that car three months after I started driving it during my senior year and spent six months in the hospital," he said. "I had to relearn to walk and speak."

Not expected to last the night by the doctors who attended him, Pohl spent the next month in a coma and the following six months in painful rehabilitation. Despite the hardship, the accident inspired Pohl to later become an advocate and speaker standing against distracted driving, creating the website benpohlspeaks.com, and speaking at organizations throughout the region.

Motivated by a desire to help people with disabilities and inspired by the recreational therapist he worked with during his rehabilitation, Pohl later attended the University of Iowa (initially on crutches while still doing physical and speech therapy several times a week), where he earned a bachelor's degree in recreational therapy.

He then moved to Chicago and got his first job at the Illinois Department of Corrections Joliet Prison, working with violent criminals. He became burnt out at that job quickly and decided to return to school and earned his master's degree in Public Administration at Northern Illinois University. With this degree, he went to work in Iraq as a reconstruction consultant with the U.S. State Department during the Iraq War and later spent time with the U.S. Peace Corp in Jordan.

Returning stateside, he worked a series of prestigious office jobs but was never happy.

"My father had always pushed me into business as he had done very well for himself as a businessman," he said. "Unfortunately, he passed away during my last business-related job. It was a great loss for me. I laid in my bed nightly looking up at the ceiling wondering what I would do with my life as he was always the person who gave me guidance. I knew I was on my own career-wise and decided to pursue my passion of mechanics. As it turned out, the best option for schools was less than five miles from my house: College of DuPage. The next day, I enrolled in spring classes and that was the beginning of my next journey."

While he chose the Automotive Technology program at COD because of the proximity to his house, great online reviews and low tuition costs, he became thrilled with the small class sizes, state-of-the-art facilities, and an experienced and supportive faculty.

“I am probably the biggest advocate of COD that you will ever meet,” he said. “Once I joined the program, there was not even one day that I was not excited about going to my classes. I am used to large university classes where I was only a number. At COD, I knew all of my instructors very well and they would stay late or come in early at the drop of a hat in order to help a student understand something better. The instructors are all former mechanics and have real world experience, unlike some college instructors who completed their Ph.D. and went straight into teaching.”

After finishing the program at COD, Pohl transferred to Southern Illinois University and credits COD for how well-prepared he was to finish a second bachelor’s degree in Automotive Technology, graduating with a 3.95 GPA. He is now back at COD as an adjunct instructor in the Automotive Technology program, teaching classes for non-majors.

“Teaching was actually one of my career goals in order to maintain a connection to College of DuPage and its high-class automotive program. I am now learning more of how the department operates and am just more and more impressed, especially with the quality of the instructors.”

Due to COVID, Pohl decided to spend some of his free time expanding his skills and obtaining his Class A commercial drivers license (CDL) through the College’s CDL program at the Addison Center. This will make him more marketable and able to break into the diesel repair arena.

“For me, the key is trying to turn negatives into opportunities. Dealing with the current world situation could really depress someone, but I was able to utilize the extra time it created.”

He eventually would like to obtain employment at a private auto shop where he can work on all makes and models of cars, as opposed to the limited experience he might gain at a dealership. After several years of this experience, Pohl hopes to use his previous education in business to open his own shop.

Considering his enrollment at COD to be one of the best decisions of his life, Pohl also has given back to the College, donating his time as the official school tutor for the Automotive Technology program, a free service to the students. He said that one of the most beneficial elements of the program is the practical lab component built into the curriculum.

"I am a hands-on learner, plain and simple," he said. "There is no substitute to actually being shown in real life how something works. For example, in our manual transmissions class, the instructor taught us about transmissions and then we were able to take one apart in class and put it back together again. The real-world opportunities in the Automotive Technology program really sped up the learning curve for me."

More about the Automotive Technology program