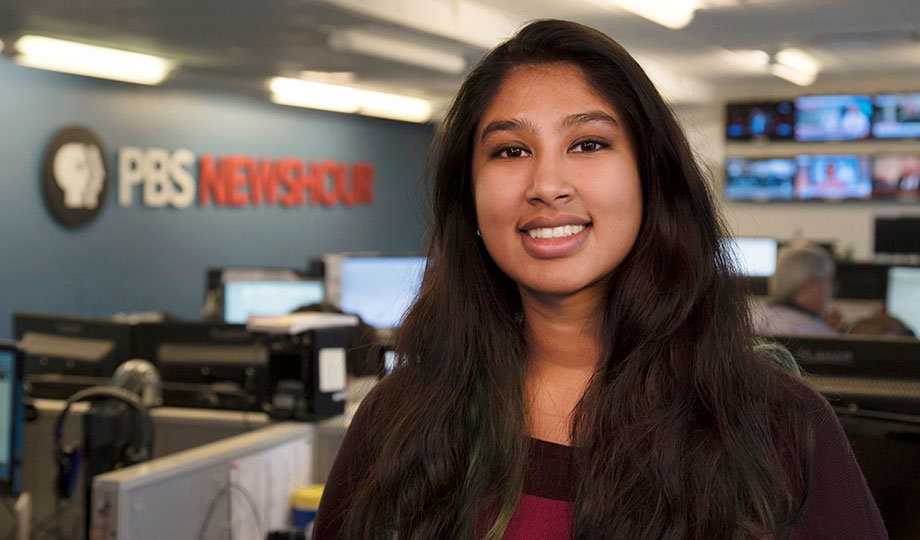 When she was a girl, Rashmi Shivni wanted to become an astronaut.

“I grew a fascination with space and the origins of our natural world as I grew older,” she said. “But at the same time, I followed science and big discoveries through watching and reading the news. All the latest research and innovations in technology were inspiring.”

Having graduated a year early from high school, Shivni was trying to decide between astronomy, a related field or science writing. She also wanted to be pragmatic about paying for school. College of DuPage became the right choice for her.

“Since I was on the fence about what I wanted to do, I decided COD would help give me some perspective and I could try out classes to help me decide,” she said. “This was a great decision because it saved me so much money, and I got to meet some amazing peers and professors while learning about myself.

“Even though astronomy was a huge passion of mine, I found something engaging and interesting about all STEM topics. That interest in everything ultimately turned me to science communication and science journalism. I loved to write and help others learn about the cool science happening every day, so science communication ended up satisfying both my love for writing and science in one career.”

After studying Mass Communication and graduating with an Associate in Arts degree from COD, Shivni transferred to Columbia College Chicago and earned a Bachelor of Arts in Science Journalism and a minor in Photojournalism. During this time, she returned to COD for classes in photography that helped with her minor.

College of DuPage in particular offers a lot of resources and guides to help you decide what you want to do.

From there, Shivni completed science writing and reporting internships and fellowships for the American Veterinary Medical Association, Fermilab, BioTechniques, the National Audubon Society, and then PBS NewsHour.

“At the NewsHour, I wrote STEM stories and produced social media content as if I were a staff journalist,” she said. “I went out in the field to report stories, I kept up with embargoed science studies each week and reported on the latest findings, I wrote feature articles and profiles on some amazing scientists around the world, and I even helped produce a broadcast piece. The goal with this fellowship was to create content that would best reach millennials and younger audiences. NewsHour definitely skews toward older audiences, so my job was to help bring in a younger crowd. It was pretty nice to be relied on not just because I’m a millennial, but also because I’m well-versed in media to know what different people like to consume. It was definitely a fascinating and amazing experience.”

Shivni, who worked as a technical writer for the Food and Drug Administration (FDA), returned to COD and finished several prerequisites for graduate school. She is now at Northern Illinois University (NIU) working on a master’s degree in microbiology with a concentration in astrobiology, which ties back to her interest in space.

STEM at College of DuPage

“I study cyanobacteria and use one species as a model organism to study how photosynthetic life could potentially evolve on another world in our galaxy,” she said. “I hope to continue communicating my work the way I share the scientific research and discoveries of other people.”

In addition, Shivni is a teaching assistant at NIU and freelances as a science writer. As for COD, she considers it a formative place and advises other students unsure of a career to take as many classes as possible.

“For many of us, community college is just a stepping stone. But College of DuPage in particular offers a lot of resources and guides to help you decide what you want to do,” she said. “It’s best to talk to people, network and take as many different classes as you can. You will get a better feel for what you truly like and can succeed at.

“I’m still early in my career and have a lot more to accomplish in my life. And in my opinion, it’s not so much my resume that should impress people. I believe people should know that I have a drive to keep trying new things – in my field or out of it. If you are a student and can’t decide about a career or what to specialize in, just try everything you possibly can. That’s the best way to figure out where you belong.”

Learn more about the Mass Communication program at College of DuPage