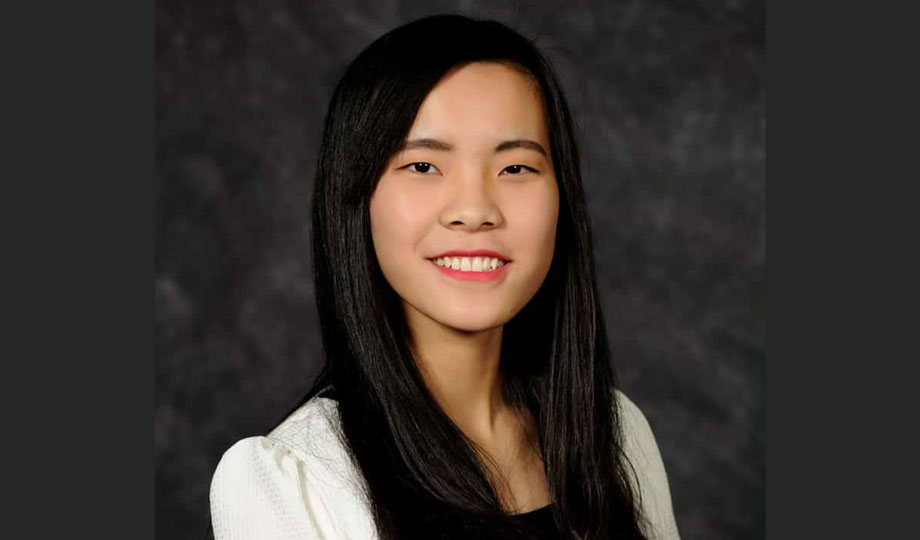 Xin Tang grew up in an environment with mixed lifestyles and worldviews.

She was raised in Xiangtan, a large city in China. But every year she spent time with her grandparents and other relatives in the country. The experience not only inspired Tang’s love for science but also triggered her desire to gain more perspectives of the world.

“Unlike in the U.S., it almost felt like someone drew a line between the city and the countryside,” she said. “I enjoyed the convenience in the city and had fun living an old-fashioned life in the countryside. I tried getting water from a well while tap water was common in the city, I learned how to light a fire for wood in the kitchen while natural gas was delivered to my house in town, and I used to run after flocks of chicken and ducks on dirt roads while cement roads in the city were widened again.”

The contrast between the city and the country was the impetus for her journey in science.

“In school, I was taught that science is the truth and there is no ghost in the world,” Tang said. “During my time in the countryside, I learned how to talk to our ancestors, things we must do at a certain time like New Year’s Eve, and about taboos during lunar January and July. In addition, I got familiar with yin and yang as well as the power of god and goddess. The conflict in the two different worldviews inspired me to dig into stories about ghosts and find the explanations for the spiritual world.

“What I have learned was that many psychic phenomena and so-called magic were explained by science, especially chemistry. The verse, ‘With mathematics, physics and chemistry, you can conquor the world,’ became my motto when I was brought into the world of chemistry. Although I am still a lover of stories about ghosts and other spiritual creatures, my academic and career goals are linked to the science explaining these stories. With the curiosity about different worlds and a passion in science, I decided to come to the U.S. and study engineering.”

Tang chose College of DuPage because a family friend had completed several courses at COD and thought it would be a good fit. The trip to the U.S. was the first time Tang had traveled outside of China, and the initial culture shock led her to learning new ways of thinking and behaving as well as questioning whether the Chinese or American way was better. In addition, English was not the best way for Tang to express her thoughts until she learned the language.

After her first months at COD, Tang fell in love with the diverse student body and the positive environment.

“When I walked into my first few classes, I was surprised to meet classmates from various backgrounds and different age groups, which inspired me to learn about people’s unique stories,” she said. “I remember talking with a Muslim mom who had an English writing class for the first time, a grandpa in my humanities class who just started learning guitar, and an LGBTQ club officer with her loving girlfriend. I also attended safe zone training and gained more understanding for LGBTQ groups. I was impressed by how brave some friends were to start a new journey at this community college.”

Tang also became an officer in the Chinese Student Club and helped to plan the Mid-Autumn Festival celebration, during which she met people from different backgrounds who were curious about Chinese culture. She also helped with the Lunar New Year Celebration, a trip to Chinatown and other cultural events.

Her involvement on and off campus included being selected as a New Student Orientation leader, which allowed her to interact with people from diverse backgrounds and practice her communication skills, and volunteering at a senior living center, where she talked and played games with the residents.

“What they taught me was that neither age nor health could be the obstacle for study or work. In fact, any identity should not be an obstacle for opportunities.”

As an engineering student, Tang found challenging classes and excellent professors who encouraged her to ask questions and share her opinions.

“I still remember how I struggled in my humanities class taught by Dr. Julia diLiberti during my very first semester,” she said. “It was both her high expectations and the language barrier that made it hard. But to this day, I still feel lucky that I asked her for help after one class and went to her office. I don’t quite remember how we made it, but my grade jumped from ‘C’ to ‘A.’

“A year later, I started taking Dr. Richard Jarman’s chemistry classes and had to meet the requirements for lab notebooks and reports. When I transferred and took higher-level chemistry lab courses, I found the requirements were much less strict than Dr. Jarman’s. His training really helped me succeed in those labs. I also enjoyed all the math and physics courses at COD. I really appreciated how accessible and friendly the professors were, and the help with math homework I got from the Learning Commons was great.”

Because of her experiences with small class sizes and accessible professors at COD, Tang transferred to Rose-Hulman Institute of Technology to pursue a bachelor’s degree in chemical engineering. While taking courses in organic chemistry, thermodynamics and fluid mechanics, she noticed that computational modeling and simulation software was often necessary for complex situations. She decided to pursue a second major in computational science, which introduced the concepts and tools of numerical analysis and scientific computation.

During her time at Rose-Hulman, Tang served as an officer in the International Student Association and the Association of Women in Mathematics. She also minored in Japanese, joined professional organizations such as the Society of Asian Scientists and Engineers (SASE), and completed her capstone senior design project in Darmstadt, Germany.

“The most impressive part of being at Rose-Hulman was the profusion of undergraduate research opportunities,” she said. “I started doing biochemical research out of curiosity and an interest in pharmaceutical companies. This project gave me the chance to try research and sparked my desire to do research after graduation.”

As for COD, Tang knows she made the best choice and hopes others do the same.

“The one advice I have is to get to know the school and people there, especially your professors. They always are willing to help if needed,” she said. “I was very fortunate to meet my lifetime friends in these courses and further confirm our interest in science and engineering. My experience at COD not only taught me how to interact with people from diverse backgrounds, but also encouraged me to jump out of my comfort zone and pursue an engineering degree in a different state.”