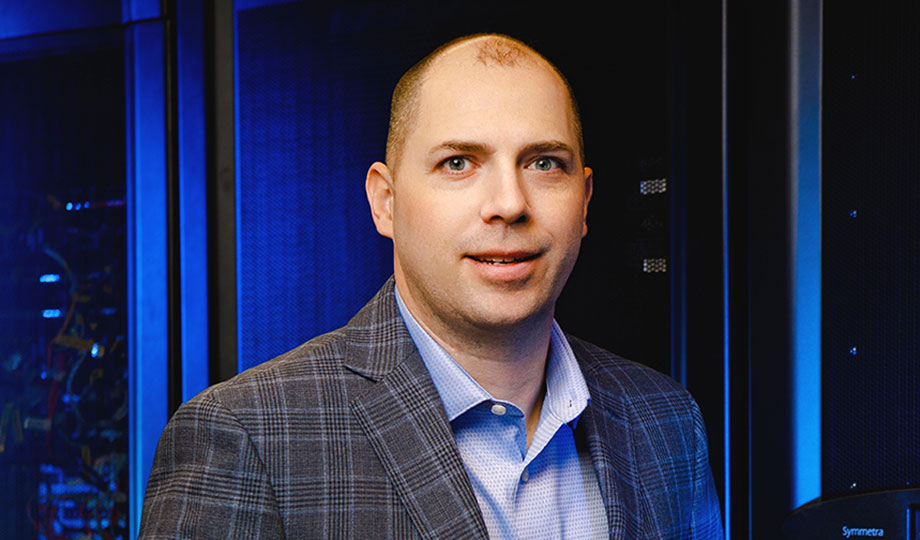 After graduating from high school, Michael Wagner moved into his own apartment to gain independence. In his 20s, he married, had three daughters and purchased a home for his family.

But he knew that wasn’t enough.

Wagner had aspirations of a career in the information technology industry but saw no realistic path, given that his job at the time was unrelated to IT. That’s when he decided to enroll in classes at College of DuPage.

“I knew that if I wanted to pursue a new career, I had to push harder,” he said. “My decision to enroll in college courses more than a decade after high school was a difficult but necessary one
to make.”

Wagner’s decision to attend COD did not come without challenges. After all, he was a nontraditional, first-generation college student who was caring for his family, and he had become unfamiliar with what it was like being in a classroom.

“The difficult part was that I did not know what to expect. No one else in my family had ever experienced this,” he said. “I also knew that going to school would leave a big burden on my family. I wondered how I was going to balance work, manage my personal and family life, and still have time to focus on school.”

Wagner also found assistance and a new source of motivation at COD.

“I was supported as early as when I had to take my placement tests,” he said. “I remember meeting with a guidance counselor who was very helpful in getting everything sorted out so I could take the exams. There was also support when I entered the CIT (Computer and Information Technology) program. The instructors were great and they believed in me, which motivated me to keep going.”

One faculty member who had a positive impact on Wagner was Assistant Professor Brock Stout. He calls Wagner a model student and an example of what can happen when students believe in themselves and make e orts to improve their outcomes.

“When I talk to CIT students about Mike, I focus on his dedication to his plan,” Stout said. “Mike wasn’t just at COD to get good grades. He was here to learn everything he could about IT. He was focused on understanding the material, knowing that what he was learning would be useful in his future. Mike not only completed his courses to the satisfaction of the College, but he would continue to study and achieve the industry certification. As a result, this extra time paid off and he is one of the most successful students we have had in the program.”

With support from inside and outside the classroom, Wagner excelled during his time at COD and took advantage of every possible opportunity.

“COD enabled me to become CompTIA certified for A+ and Network+, and I earned the Cisco CCNA Routing and Switching certification,” he said. “I completed six College certificates within the Computer and Information Technology program and, to wrap it all up, I finished my associate degree.”

Not only did Wagner earn a degree in 2016, but he was also named one of the College’s Outstanding Graduate finalists.

“Being a finalist for Outstanding Graduate meant a lot. It was an honor to know that I had a chance to win the award,” he said. “When I decided to go to college, I knew that I wanted to give it my all because my family was sacrificing. My mindset was that I did not want it to be for nothing. This proved that it was not for nothing. I remember having my kids at the graduation ceremony because it was important for them to see that.”

Throughout his time at COD, Wagner was inspired by his supporters and his doubters.

“To all the people in my life who doubted me and to everyone who believed in me, thank you. Because when times became rough for me mentally, physically and emotionally, I used your comments as fuel to continue to push forward. I proved that a person can be more than what they’ve become and that it’s never too late to succeed.”

After graduating, he interviewed for many jobs before accepting one as a network engineer with an industry leader in purpose-built video surveillance. His work took him around the country to such places as Silicon Valley, Scottsdale, Gulfport and Las Vegas, and he even traveled to Central America to Panama City for IT work on the Panama Canal.

He currently is employed as a network systems engineer by Republic Bank of Chicago, where he focuses on security infrastructure. Wagner said that he uses skills he learned while at COD on a daily basis.

“My role as a network engineer has provided me the opportunity to implement, design and install a wide variety of IT-related systems,” he said. “I have applied many of the things I learned throughout my education and so much more.”

Wagner continues to pursue his education through the CIT program, earning his CCNA Wireless certification and Design certification, and is considering a second degree in Cybersecurity and Defense. He used the COD Pearson Vue testing center to recertify for his accredited IT vendor certifications and will use it again as he currently is preparing for another Cisco certification.

Wagner wants other adults who are considering going to college to know that age is no barrier to rewriting their stories.

“My advice to future students at College of DuPage would be that it’s never too late to succeed if you believe in yourself. Never let your situation define you—rather, de ne your situation. With dedication, commitment and sacrifice, you can achieve your goals.”

Learn more about the Computer and Information Technology program at College of DuPage.