Keynote: Why Science is Dope 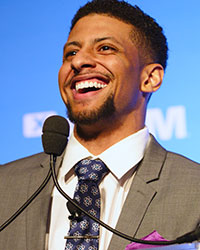 Boring lectures and uninspiring teachers often ruin students' perceptions of STEM. This adventurous talk informs students about real life experiences of modern STEM professionals, and the prospects of STEM careers. Students will leave this talk well-aware of their potential career and scholarship opportunities in STEM. A Q&A will take place following the webinar presentation.

Justin’s goal “to be for STEM what ESPN is for sports” and to inspire young people to “embrace their inner nerd despite their surroundings,” springs from his own life experience. Growing up in a single parent home on the South Side of Chicago, he had little awareness of the potential of a STEM career. Self-taught and fascinated by science, Justin earned scholarships from NASA and NOAA that covered 100% of his tuition and room and board at Hampton University.

Kick-starting his professional speaking career with a popular TEDx Talk How to Speak Generation Z, Justin continues to reach millions with his content, keynotes and workshops. Justin’s work has been featured in ABC, Forbes, Essence and other media.