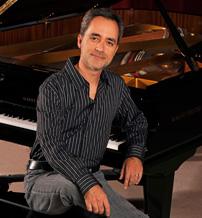 When Alexander Djordjevic was 3, his father bought his mother a piano.

When the youngster began showing an interest in the instrument, his parents decided to give him lessons. After studying piano throughout his youth and teens, Djordjevic received a full scholarship in piano performance to the University of Illinois Urbana-Champaign, where he earned his bachelor's and master's degrees and has finished his doctorate coursework.

In the early 1990s, he earned a Fulbright Scholarship to study in Germany with famed Russian pianist Vitaly Margulis.

"At that time, he was considered the top teacher in all of Europe," Djordjevic said. "I learned about the different schools of musical thought – Russian, German and French. It not only shaped the way I perform but also how I teach."

In 1995, he began teaching piano at College of DuPage, where he gives lessons to people of all ages. Djordjevic also has performed around the world, as a soloist as well as with various orchestras. This includes a concert in the former Yugoslavia, where his parents were born, that was attended by his grandmother and other relatives he had never met.

He recorded his first CD in 2000, "Alexander Djordjevic Plays Scarlatti, Beethoven, Chopin, Rachmaninov and Liebermann," a self-produced effort that he uses to send out to competitions or presenters who want to know how he plays.

Djordjevic performed a recital in October 2010 in Budapest, Hungary, on the anniversary of Liszt's birth.

"I was in shock that they chose me for this," he said. "I've always loved and admired the music of Liszt, as well as Liszt the person. He was kind and helped other musicians by playing their works. After a certain time in his life, he even gave up charging money for lessons.

"This CD of his later works is unique because when people think of Franz Liszt, they think of pieces like 'Hungarian Rhapsody No. 2,' which is flashy and showy. A lot of his music had that quality. But during the last 20 years of his life, he wanted to get away from this and went in the opposite direction, using as few notes as possible. His music became much more introspective – slow, quiet and extremely thoughtful. I felt the world needed to see this different side of Liszt and how much depth there is in his music.

"I don't care how many CDs I sold," he said. "Liszt was one of the greatest pianists who ever lived, and I just wanted to record it and get it down for people to hear. This award was the biggest thing that has happened in my professional life."

More about the Music program