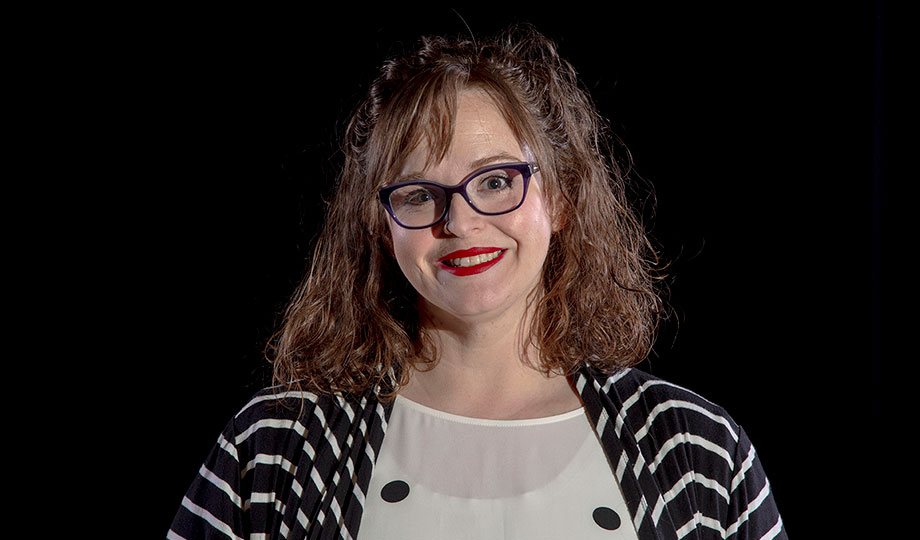 As a child, Mia Poston was convinced she was going to be an acrobat who jumped onto moving horses in the circus or a firefighter/veterinarian. She also was convinced that she would not become a teacher.

"My Mom was an elementary school teacher and I wanted no part in dealing with students and parents," she said. "However, in high school, I was cast as a freshman as the villain in our school's spring play. Everyone else in the cast was much older and on the Speech Team. Perhaps to impress another cast member I had a crush on or because I liked the attention, I ended up competing in speech my sophomore through senior years at Red Bud High School in Southern Illinois. At that point, I realized my love of reading and creative writing and started singing a different tune when it came to being a teacher."

At Illinois State University, Poston had a successful collegiate Speech Team experience. She also majored in secondary English education, and after three years of college she taught for two weeks at a local high school -- an experience that made her realize high school students were not who she wanted to teach.

Poston changed her major to Speech Communications, which took one extra summer to complete. She then earned her master's and Ph.D. at the University of Alabama, where she coached the speech team and taught two sections of public speaking, which she loved.

"I found out that it wasn't that I didn't like teaching, I just hadn't found the age group that I clicked with," she said. "I really like seeing students improve their skills through a semester. A student may be extremely upset and nervous for their first speech and then gradually feel more and more confident through the semester. I love final speeches because it's like the finale. Everything they have done previously leads up to their last performance.

"I also like teaching public speaking because I get to learn new things every semester. I allow students to mostly talk about what they find important. When students are passionate about their speech topics, their audience, me included, becomes passionate about their cause. I've stopped using plastic bags at the grocery store due to a speech, I only buy organic blueberries and certified humane eggs, I listen to different music now, and I've even started peeling my bananas differently because a student demonstrated a better way to do it!"

Poston initially worked at a small rural college an hour south of Atlanta, where she not only taught speech but also was the Faculty in Residence, which meant she and her husband lived in the dorm where she provided tutoring and advising through evening office hours.

"To put in context how rural the town was, the movie 'Deliverance' was filmed not far away and most of the television show 'The Walking Dead' was filmed nearby," she said. "The only bad thing about that gig was the monthly fire alarms and that the only chain restaurant in town was Dairy Queen. The rest was BBQ."

Poston came to College of DuPage in 2011. She is inspired by many, starting with her son, Malcolm, and husband, Andrew Jones.

"It's really cool to see how a toddler sees the world. He gets excited by the simplest things, like a bubble bath or even the novelty of having a straw in a cup," she said. "He really does help me see the world in a new way and I'm so lucky to get to see the world through his eyes.

"In a less mushy or at least differently mushy way, I've been inspired by my past teachers and professors. One of the teachers who really stands out was Myra Lessinger in high school. She taught Algebra, which I HATED, but she showed up early every single day to help her students and I was there almost every single day. I had never been more proud of a 'B.' She never made me feel stupid or behind but would help me think of new ways to understand the problems. During my sophomore year, my locker jammed and, for some reason, the janitors were unable to fix it. Mrs. Lessinger let me keep my books in her filing cabinet and had no problem with letting me pop in between every class to get my books.

"My other favorite high school teacher was Mr. John Osman. He was an absolutely wonderful man. He was delightfully sarcastic but never mean-spirited. He taught pre-college composition for seniors and his expectations were high. I learned that just because a paper bled with how many comments he provided, it didn't mean that the paper wasn't good. It meant that everything can be improved. His class definitely prepared me for college. In fact, after reading my first two papers, my English 101 professor told me I didn't need to come back until the final exam because I had already mastered the skills he was going to teach. It wasn't because of my innate paper-writing ability, but the guidance and tough love Mr. Osman provided.

"It also didn't hurt that Mr. Osman got me hooked on coffee. He'd allow my best friend and I to sit in his room before school started and he would bring each of us a cup when he came back from the teachers lounge. He'd even bring us sugar though he made sure we knew he thought less of us for using it."

More about the Speech Communications program