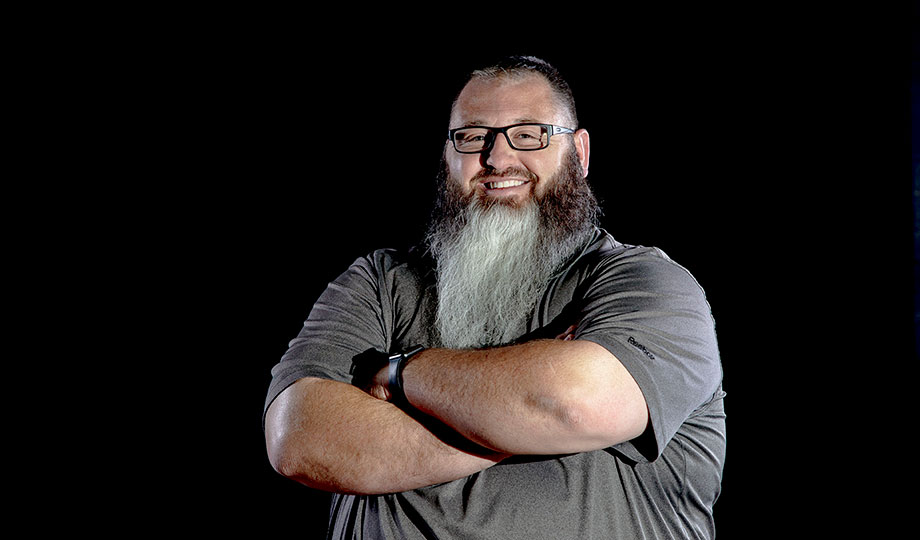 Steve Thompson went to college wanting to be a sports journalist.

He wrote for his high school newspaper and was an athlete, so he thought the two areas would merge into a career path. However, he hated his college newswriting classes and switched to television and radio production. After finding out how poorly entry-level jobs paid, and knowing he would need to start in a small market to gain experience, he looked for another option.

“About that time, I was really enjoying my other communication courses in the Speech department,” he said. “Two professors really made an impact on me and encouraged me to explore how I could make speech communication a part of my goals. Eventually, with their encouragement, I went to graduate school and then explored careers in academia.”

“Every night at the dinner table, and every weekend sandwiched between my sporting events, were conversations about the education system, teachers in the classroom, organizational structure and leadership, dealing with problem students, funny interactions with students, or activities tied to the school,” he said. “Once I figured out that sports journalism wasn’t my path, I gravitated toward what I knew best and what I heard about each day.

“Because athletics were a huge part of my life, coaches were instrumental in developing my athletic talents, communication skills and leadership abilities. I believed this was something I wanted to do for others. Teaching became a great way to make a positive impact on others but in a classroom rather than on an athletic field.”

Thompson spent three years as a full-time faculty member at South Texas College in McAllen, Texas, before joining the Speech Communication program at College of DuPage in 2005. He believes anyone can be a good public speaker.

“Many people approach public speaking with a negative attitude,” he said. “People think they don’t have anything valuable to say, or that they can’t speak in a way that makes sense to others, or they will never be as good as so-and-so, or people are going to notice they are nervous and can’t have others judge them – whatever is in their heads, most of the time it’s not a positive attitude or confidence associated with public speaking.

“It may take time and training and hard work, but anyone can be successful. It’s just like completing a triathlon. You have to log the miles, train properly, eat well and hydrate, but anyone can do it.”

In addition to helping his students gain speech communication skills and confidence, Thompson wants them to leave his classes with more self-awareness of who they are as communicators. He hopes they develop a sense of what they do well and in what areas they still need growth in order to contribute more thoughtfully to their teams, families, relationships and academic environments.

“I want my students to know that you can have fun and laugh in the classroom and still learn,” he said. “In addition, because I teach so many courses in Sports Communication, I want those students to appreciate the impact of sports on their own lives and use the positive traits gained from sports participation to be more competent communicators.”

As for inspiration, Thompson finds it in his father, Dennis.

“On top of doing his job well and being well-respected across the school district, he always loved and supported me unconditionally. I played every sport imaginable under the sun and he might have only missed two or three games or events over 17 years,” he said. “He was a constant presence who was known to coach teams when needed, offer praise and high fives in good times, or be a sounding board when I was struggling with something. He works so hard all the time and I love that about him. He dedicated his life to public education and making others around him better people.

“One of my favorite things I remember about my dad as a principal was that he remembered every single student’s name. He might meet a kid as a fourth grader and would remember the kid beyond high school graduation when seeing the kid around town. I always noticed how special it made a person feel to be recognized. It was impressive. When I became a professor, one of the first things I do with my classes is memorize each student’s name. I want to use their name every time I see them in class, in the halls or even when shopping at Target. When I see my former students five years later, most are amazed I still remember their names, but this is something I come to expect of myself as I try to emulate what I witnessed from my dad.”

Thompson also loves being around students.

“They breathe life into the hallways, classrooms and sports fields on campus. The students bring so much to campus and I enjoy creating a classroom space where they can share their experiences with others, learn from others and learn how to communicate in a more meaningful way.”

More about the Speech Communication program