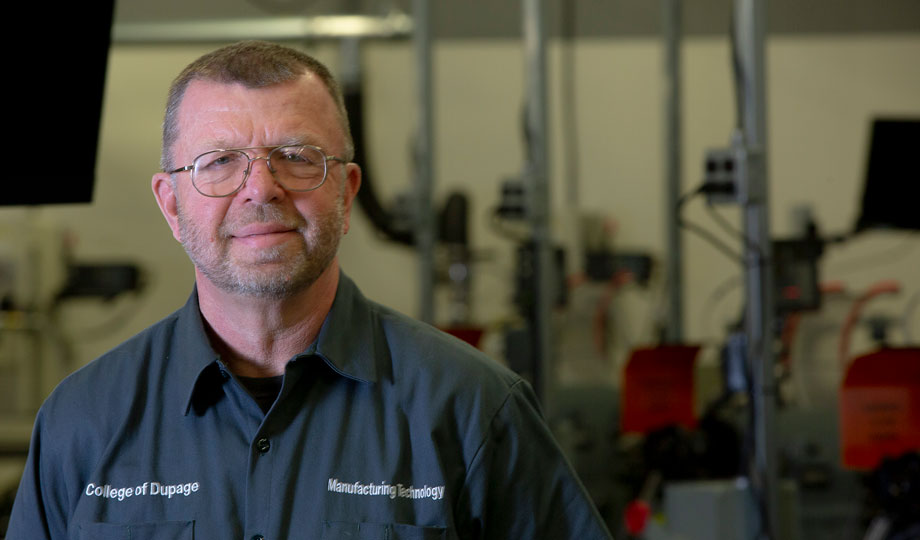 “I have been a builder since day one,” he said. “I was always playing with Tinker Toys, Erector sets, Lego blocks – just about anything to build with. After I graduated from Morton Community College, General Motors hired me as a tool and die apprentice. On my adventure to becoming a journeyman tool and die maker, I learned how to make the machines that make the products we buy at the stores today.”

He also worked as a model maker and a CNC programmer before becoming a senior manufacturing engineer for Dukane Corporation in St. Charles and Dentsply Professional in Des Plaines.

While at General Motors, Tumavich developed a CNC class and has since been an educator in some manner for more than 30 years. He began teaching part-time at College of DuPage in 2000 and became full-time in 2014, and he believes it’s about paying it forward.

“General Motors invested a lot in me, training me to become a tool and die journeyman,” he said. “There are not a lot of us left now, as most of the apprenticeships stopped in the late ’70s and the companies focused on bottom line management instead of employee training. All of the skilled tradespeople trained in the ’80s are now retiring and there have been very few trained since then.

Tumavich uses encouragement to help his students achieve during the lab sessions.

“Since the outcome of the lab portion of the class is directly dependent on the ability of the student, we always offer encouragement to get the job done to the best of the student’s ability. Using encouragement and positive feedback, we try to teach our students that they can eventually achieve anything they set their minds to,” he said.

He is inspired by these students as well as his two children, who both attended College of DuPage. Tumavich believes the next generation has much more to learn than he did, which may lead to exciting breakthroughs in the future.

“While my generation of educators and engineers pioneered Computer Numerical Control machines, Computer Aided Drafting and Design systems and now three-dimensional printers, I always ask my students to imagine what will be next,” he said. “Today CAD is a college-level course, tomorrow it may be part of a preschool class. If that is the case, then what will today’s preschoolers be learning when they are in college?

“Tomorrow’s engineers may simply think of a design and then transfer that thought to a holographic printer to share with his or her team. So my inspiration comes from the belief that everything I share or teach to my kids or students may someday lead to that spark of an idea that will ignite into a firestorm and change the future.”

More about the Manufacturing program