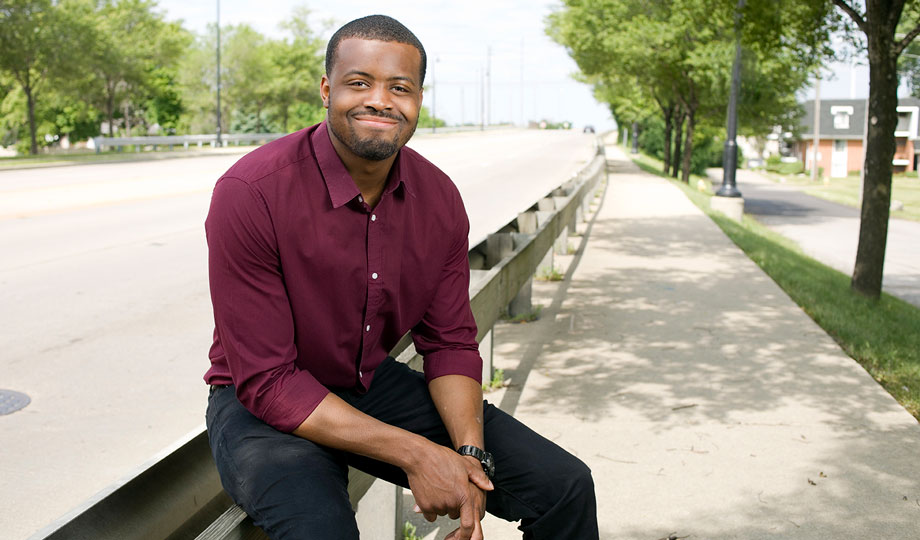 While working in the food industry, Adrian Brown found himself at a standstill.

“I experienced going from crew member to general manager, and I saw that there was no other progression for me. If I kept moving up, then my objective would not change much and I felt like I hit the ceiling,” he said. “That situation led me to College of DuPage. I needed to start on a career path where I felt fulfilled and there was no limit, and COD is infamous for its selection of majors and different programs. COD and the faculty did not disappoint with helping me choose the right career path and always supporting me.”

Brown’s new career path was psychology, because knowing the brain’s structure always interested him. Obtaining information about the brain gave him an infinite amount of ideas for research, and he worked with faculty and fellow students on several projects.

“Our advisors made sure students were able to comprehend research articles by giving us templates and worksheets to help us interpret them,” he said. “One topic we worked on was meditation and if it had a correlation with improving analytical thinking. We developed a design for the project and it is currently collecting data. Two other projects received publication – ‘Perception of Coloring and Stress Relief’ and ‘Persuasiveness and Swearing: How Gender, Status and Word Choice Influence Attitudes’ – and one of them was presented at a COD symposium.”

In addition to research projects, Brown was president of Psi Beta, the student psychology club. He started as a member, attending meetings and volunteering to promote the club through bake sales, the Student Life fair and STEMCON.

“I was part of a community embedded in COD, and to be a part of something helped with COD feeling like a second home,” he said. “Promoting the club and obtaining more members was the most important task. I wanted to attract every student who yearned for the feeling to connect with other students and to have a good time joining a club. Being president was challenging but it was also one of the greatest experiences I had during my time at COD.”

He also received the COD Succeeds Scholarship from the COD Foundation.

“The scholarship helped me in a big way because I pay for school out of pocket. Because of the scholarship, I could cut back on work hours that relieved a bit of stress from working full time and going to school full time.”

In 2020, the Psychology faculty recognized Brown for excellence during the annual Celebration of Academic Excellence. Now at North Central College, he received the First Generation Scholarship and applied to PUMA STEM, an alliance focused on strengthening underrepresented minority student success in STEM. He was accepted into an internship and conducted neuroscience research on the effects that differential rearing has on drug addiction in rats. In fall 2021, he became president of the Neuroscience Club and conducted more research.

His ultimate goal is to earn a Ph.D. in Neuroscience, after which he would like to research human consciousness.

Brown urges all students to take advantage of the many resources available at COD as well as get involved in extracurricular activities.

“Every accomplishment deserves a celebration, no matter how small, and never lose sight of what you are striving to be,” he said. “COD provides everything it can to help students. COD taught me leadership skills through workshops; they hosted a symposium to help students in psychology with their career paths; and they hosted events for students to find internships, jobs and schools to go to after their journey at COD. I was able to structure my career path because of the help of my advisors, COD librarians and other COD students. COD also has an amazing faculty team that is always willing to work with students.”

Learn more about the Psychology program at College of DuPage.