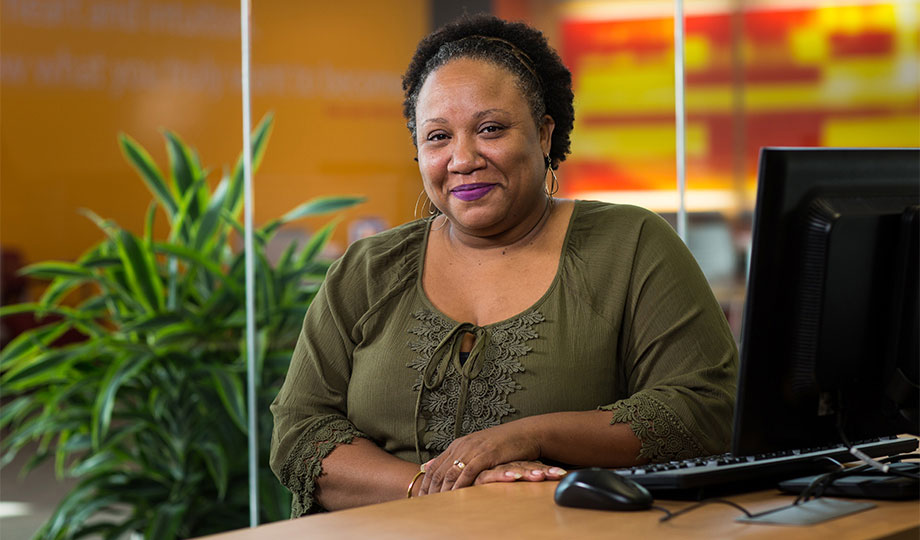 Violet Jackson has always been vocal about the value of a college education, even though she did not have one.

“Although I have told my daughters and the younger generation of my family how important it is to obtain a college degree, I never did,” she said. “I began working right out of high school at a factory and advanced to an administrative assistant position before I was laid off from my last employer, after being in the workforce for almost 29 years.”

While trying to find employment with only a high school diploma, Jackson was disheartened because positions either required an associate's or bachelor’s degree.

“It didn’t matter that I had the experience. So I decided I needed to follow my own advice and obtain a college education,” she said. “I researched and found College of DuPage offers programs for students from every walk of life. I met with a College of DuPage counselor, and after a lengthy discussion, we decided it would be advantageous for me to work toward two degrees: one in my current field of Office Technology, and the other in Computer and Information Science, due to my interest and passion for working with computers.”

When impressed with the College's reputation, affordable tuition and welcoming staff, Jackson appreciated how she was treated. As an adult student coming to college for the first time, she felt like a person, not a number, and everyone provided patience and support.

“I attribute this to the fact that my employer was impressed with my enrollment at COD and my work on two associate degrees,” she said. “At one point, I was concerned about continuing because I felt going to school while working and taking care of my family was going to be difficult. One of my professors, Mrs. Wendy Felder (who has since retired), encouraged me to not give up because I was doing so well. I did not give up and took all of my courses online, which worked great with my learning style and schedule.

“And though I was working full-time, I maintained a 3.8 GPA. This was only possible due to the support of my family and the professionals at COD. I am very appreciative of the support given because it helped me as I fulfilled my goals.”

Jackson was a member of the Phi Theta Kappa, the International Honor Society of America and Alpha Beta Gamma International Business Honor Society. Having earned her two degrees with honors, she is deciding what to do next, which could include a bachelor’s degree in Computer Information Systems.

Whatever route she takes, Jackson is thankful that COD sparked her quest for knowledge and allowed her to serve as an example to her daughters.

“I was able to demonstrate that it is never too late to set a goal, work toward it and get rewarded for working hard,” she said. “I noticed a positive change in their attitude toward school and saw a slight competition amongst them to do better. It pleases me to know that I am a positive motivator to them and possibly others.

“I would encourage anyone considering enrollment at COD to make an appointment, meet with a counselor and tour the facilities. I am certain they will find that COD brings just as much to the table as other institutions but in a caring, supporting and flexible learning environment at an affordable cost. COD is a great school and I am proud to be a Chaparral!”