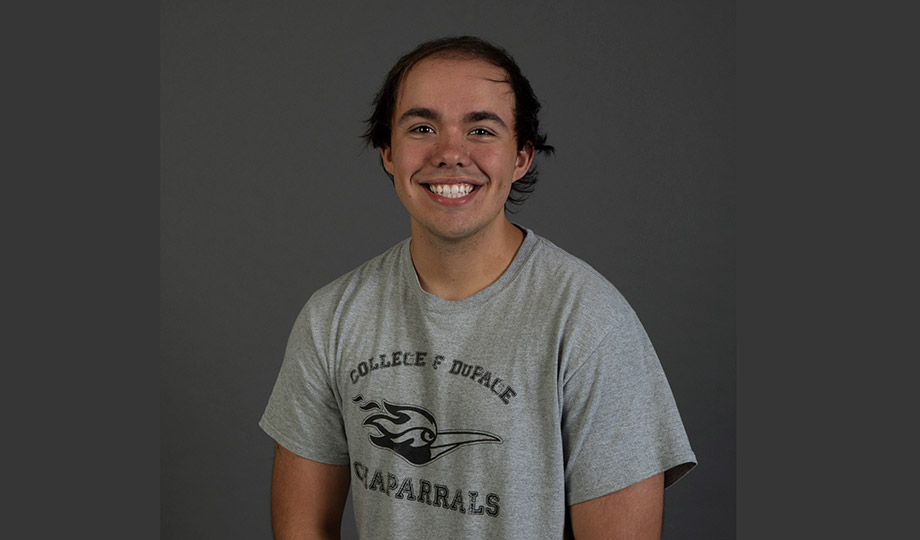 Maxwell Harris is making the most of his time at College of DuPage.

He initially planned to attend University of California, Berkeley. But the scholarship they offered did not compare to being named a Presidential Scholar at COD, which covers full tuition and membership in the Honors Program and Phi Theta Kappa.

He also was accepted into the Engineering Pathways program, which offers guaranteed admission to qualifying students interested in transferring to The Grainger College of Engineering at the University of Illinois at Urbana-Champaign.

“COD was the best choice I could have made when selecting a college,” he said. “It has allowed me to get a personalized education where I get to speak to all of my extremely qualified professors regarding a tough curriculum, all while not having to take on student loans. I can't emphasize the pressure being a Presidential Scholar has taken off both me and my family regarding how to pay for school. Not only this, but the scholarship pushes me to be my best given that it requires me to volunteer and maintain a minimum 3.5 GPA.”

COD was the best choice I could have made when selecting a college. It has allowed me to get a personalized education.

During his first year, Harris became president of the Engineering and Technology Club and was part of the Robotics Team, which earned two top awards at Lunabotics, NASA's annual Robotic Mining Competition held at the Kennedy Space Center. He also published an article in the student magazine Prairie Light Review and started the COD Math Club.

As a member of the Honors Program, he presented at the Honors Council of the Illinois Region Student Symposium and was vice president of fundraising for the Honors Student Advisory Committee (HSAC), which has contributed to his success at the College.

“When I first came to COD, Dr. Lisa Higgins took the time to meet with me during a Zoom appointment and discussed a lot of the available opportunities, which is also what takes place during HSAC meetings,” he said. “This is where I learned about the Honors Council symposium. Because of this, and as a freshman, I was able to give a research-based presentation to peers and professionals regarding future trends in civil engineering.

“I was initially nervous about honors courses, but they are the most interesting classes I have taken at COD. I’ve been part of student-led discussions regarding topics that truly enhanced my knowledge in the course.”

After earning an Associate in Engineering Science degree at COD, Harris plans to pursue a bachelor’s in civil engineering, which first interested him during a dual credit course offered by his high school with COD. His goal is to travel abroad and use his knowledge to help people in developing areas.

His advice for incoming students is to get involved. Harris invites anyone to contact him about joining the Math Club or the Engineering and Technology Club.

“COD has so much to offer and there truly is something for everyone,” he said.