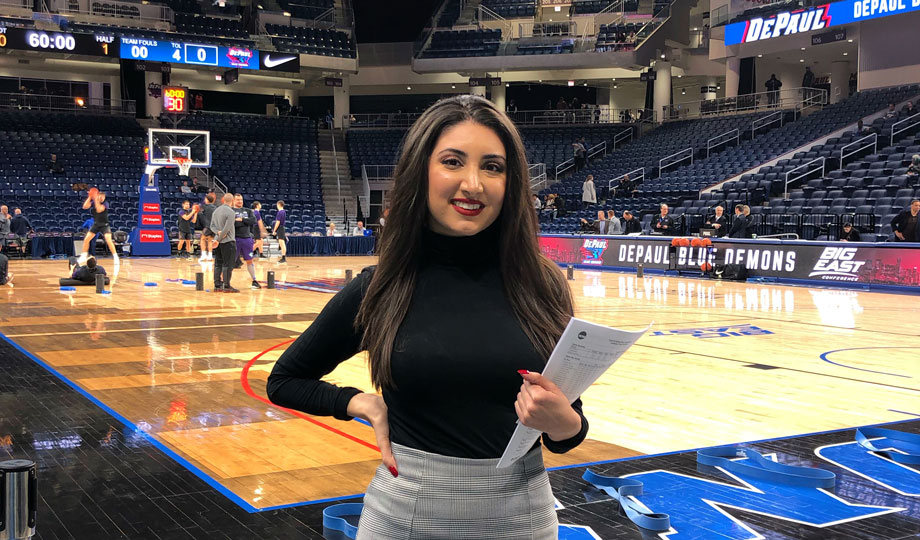 Bella Michaels’ strong points in school were writing and foreign languages, so she wanted to find a career that would draw upon these skills.

“I thought to myself, ‘How can I combine what I’m strong in with what I enjoy, which are sports, entertainment and talking on camera?’” she said. “I chose sports journalism and media because I figured I could apply all of my skills to a career that I would enjoy.”

Michaels graduated from high school early and decided to start at College of DuPage, where she could finish her general education requirements at an affordable cost while staying close to home. It also gave her an opportunity to determine exactly what bachelor’s degree to pursue.

What she found at COD were supportive professors who guided her along her career path.

“Sandy Fries, Shari Lendy and others were such a great support system,” she said. “Being that they were all so different from each other, they educated me in areas that really helped me with where I am today. I remember Professor Fries literally getting upset at me when I said I didn’t know if I wanted to go into sports journalism because of the high competition and low job outlook. He responded by saying how successful people don’t worry about that and pursue what they want to do. I liked that he was direct and to the point.

“The same goes for Professor Lendy. She was available outside of class and genuinely cared about helping me succeed in my field. Even other professors for classes who weren’t part of my field, like psychology and chemistry, were so genuinely nice and made me enjoy their classes even if the topics weren’t my favorites.”

After earning her Associate in Arts degree, Michaels transferred to DePaul University and immediately began building her resume. She interned at the Chicago Tribune’s Hoy publication, where she covered the 2018 World Cup; was a guest on WSCR 670 AM The Score Chicago Sports, NBC Sports, and Laurence Holmes’ podcast, “House of L”; and freelanced at beIN Sports Miami, an international soccer TV network.

“From the moment I left COD, a lot of amazing things happened that I never thought would have happened, especially not this soon,” she said. “I have gained such great mentors who work at places like ESPN, NBC Sports, Washington Post, Big Ten Network, Stadium and more. I was a sports reporter and anchor for Good Day DePaul, our university TV station, where I covered our DePaul Men’s Basketball and Soccer teams and did a lot of different athlete features. One of the most exciting experiences for me was being credentialed by the NBA and covering All-Star Weekend in Chicago. I interviewed so many of the NBA’s top athletes and gained great experience.”

Michaels now works as a sports reporter in south Texas and is enjoying the opportunity to start her career and grow into it. Her ultimate career goal—and she admits this could change—is to become a television sports personality.

“I love connecting with and interviewing people, and since I speak five languages, I can interview people multiculturally. My work wouldn’t have limits. It would break language barriers and expand audiences.”

As for COD, she advises students to say focused on their goals.

“It’s easy for someone to say that they have a goal, but it’s not easy to put the hard work behind it to actually make it happen,” Michaels said. “And that’s the secret—just hard work and staying focused. I truly believe everyone is capable of making their dreams come true. If someone told me I would be covering the NBA All-Star Game at 21 years old, I would’ve told them they’re kidding me. What made it happen is the work I put in and the connections I made.

“Networking is also important, so network no matter where you are. The person that you’d least expect meeting at Starbucks could end up being the CEO of your dream company. So be nice to everyone and make connections with them.”