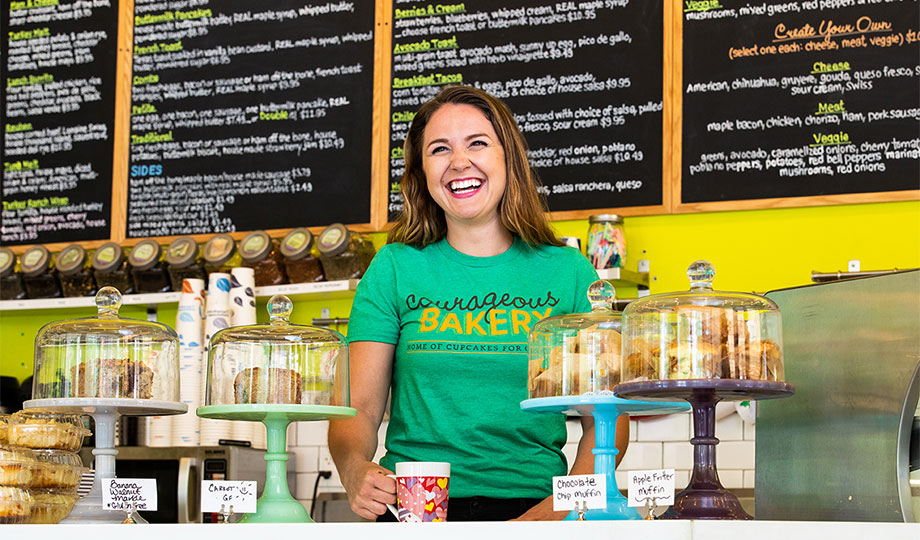 Laura Pekarik’s recipe for success combines entrepreneurship and philanthropy in a personal way.

The College of DuPage graduate’s Courageous Bakery and Café in Elmhurst is home to Cupcakes for Courage, where a portion of the proceeds go to the Leukemia and Lymphoma Society, the Ride Janie Ride Foundation and other local nonprofit organizations. The initiative began when Pekarik’s older sister Kathy was diagnosed with non-Hodgkins T-cell lymphoma in 2010.

“For years we had loved baking everything from pastries to scones,” Pekarik said. “When I visited Kathy at the hospital, we would dream up cupcake recipes. I then came home, tried out a new recipe that we discussed and brought the cupcakes to the hospital on my next visit.”

When a friend organized a fundraiser in Kathy’s honor, Pekarik baked more than 12 dozen cupcakes for the event – and they were a hit. Pekarik and her sister decided they should find a way to share their love for baking while raising money for a good cause, so they created Cupcakes for Courage.

Pekarik began taking cupcakes to craft fairs and other events. Then two of her other sisters saw a food truck that sold cupcakes. Pekarik and her mother tracked down the truck, tried the cupcakes and decided, “Why not us?”

While driving to look at an oven, Pekarik found a small truck for sale parked at a Red Lobster. The vehicle was a bold yellow and caught her attention.

“My mom and I went into the Red Lobster and asked if they knew who owned the truck. It turned out to be one of the cooks,” she said. “I decided to take a chance and withdrew my savings to buy it.”

In 2011, the Cupcakes for Courage food truck hit the road, becoming one of the first in Chicago’s growing food truck market. It also allowed Pekarik to use the business skills that she began to hone while at College of DuPage.

She initially enrolled at COD because it was close to home and her father convinced her to do so. Pekarik was later grateful that he did.

“It is such a good value,” she said. “COD is where I began thinking about what to do as a career path. In addition to taking business classes, I dabbled in accounting, marketing and math courses. I also felt like I was ahead of my peers because I was able to work and go to school.”

Pekarik earned her Associate in Applied Science degree in Business and transferred to Elmhurst College to pursue business and advertising. She was part of a 14-month cohort program while working as a manager for a travel agency call center. Her goal was to eventually run a business – but someone else’s.

However, before Pekarik could complete her degree, her sister was diagnosed with cancer and life suddenly veered off in a different direction. She took time off from work to be with her sister. When Kathy began to recover, Pekarik tried returning to her job but the passion was no longer there.

“When the opportunities for the business presented themselves, I felt like everything was falling into place. I also knew that I was young enough to do something else if the food truck didn’t work out,” she said.

Although Kathy made the difficult choice of not joining the business, she was instrumental in creating recipe profiles and flavor creations. Two of their favorites are a maple bacon cupcake and the Survivor Cupcake. Pekarik admits to loving tie-dye, so the latter cupcake features all of the cancer awareness colors.

Kathy, who is now married and a mother, also provided the inspiration for Pekarik to build the business. This included purchasing a second truck and opening the Courageous Bakery in downtown Elmhurst.

“Initially I was using a storefront two doors down as a commissary for the food truck,” she said. “I was looking for another space when a tea shop that was here moved out. At first I was intimidated because it was so big, and it took me two months to decide to take it on.”

At first, the Courageous Bakery offered only cupcakes and other baked good, but then Pekarik expanded it to now feature breakfast and lunch. In addition to cupcakes, scones and cookies, menu items include breakfast sandwiches, homemade pancakes and lunch sandwiches, such as corned beef and BLTs. Pekarik uses natural ingredients without preservatives and is proud to incorporate environmentally sound practices into the business.

Currently she is going through a rebranding that includes new menus and new looks for the food trucks. As her success continues, including a second Courageous Bakery location in Oak Park, Pekarik appreciates what she learned at College of DuPage.

“All of the teachers really cared about my grades and supported me,” she said. “I also liked the mix of adult and younger students because I learned from the varied opinions that these different generations had to offer.

“Two classes I recall that I still refer back to are Anthropology and Marketing. Anthropology opened my eyes to studying the behavior of people in their environments. I apply this every day and try to come from a place of acceptance and giving everyone an equal opportunity. My Marketing class made me think outside the box.”

More about the Business program