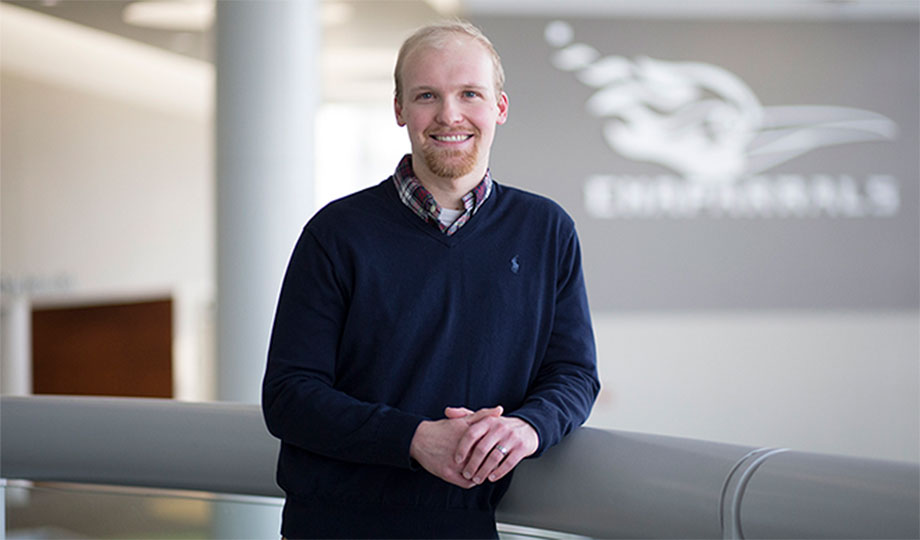 But a former coworker encouraged him to check out COD. Then he applied for and was named a Presidential Scholar, an impressive award that includes a full-tuition scholarship and enrollment in COD’s Honors program and the Phi Theta Kappa Honors Society.

Slinkman said it was an easy choice at that point. Then he discovered what a great school College of DuPage is.

“My professors really impacted my life, and I know I am better because of the influence they had on me,” he said. “They really care about their students and that is great to see.

“Professor Karen Persky let me know about an internship at Grace Analytical Lab, which specializes in the testing of soil and water for pollutants as well as testing cosmetic and pharmaceutical products for bacterial pathogens,” he said. “I learned a lot about lab work, which is something I want to go into.”

Assistant Professor John Paris nominated Slinkman for the Carter Carroll Excellence in History Award for outstanding work in the field of history writing. He received an honorable mention for his analysis of Tim O'Brien’s book “If I Die in a Combat Zone,” which talks about the author’s experience during the Vietnam War.

“I was just trying to get an ‘A’ on the paper, and in doing that Mr. Paris ended up nominating my paper for the award,” he said. “Through writing my paper, I learned that war is not a glorious thing but involves tough moral decisions from the men and women who are fighting.”

He completed another of his education goals, a Master of Science in Microbiology and Cell Science, with a concentration in Medical Microbiology and Biochemistry, through the University of Florida. Slinkman is now pursuing his goal of teaching as an adjunct faculty member at Elmhurst University.

He also wants to continue traveling around the world to help on a variety of projects. So far he’s built houses in Mexico, fed the homeless in New Orleans, worked at an orphanage in Honduras, and installed a playground at an orphanage in Haiti that his church supports.

“I enjoy helping people in whatever way I can,” he said.