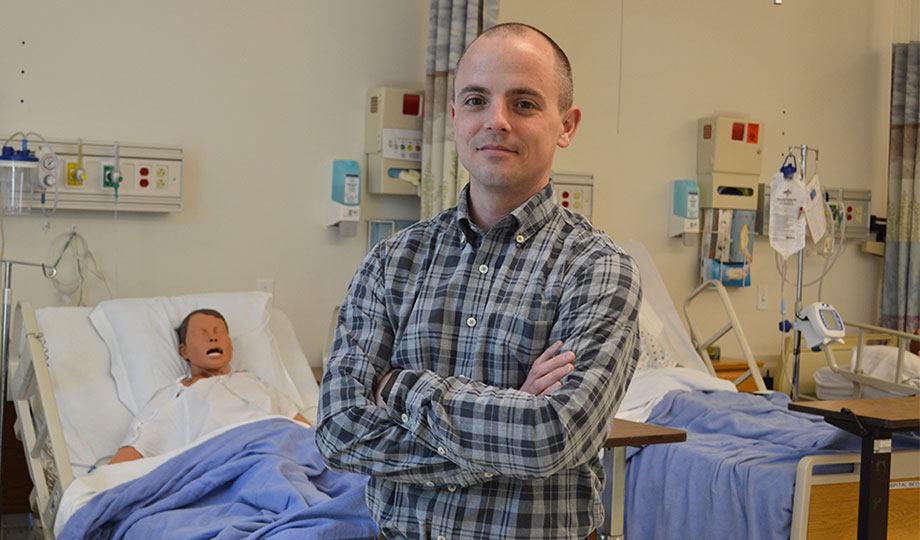 Brandon Smith was always interested in a career working closely with people, but he never had a direction to follow.

He tried taking college courses years ago but was not serious about education. Instead, Smith held a series of job – cable installer, UPS package handler, baggage handler at American Airlines – before working for Frito-Lay as a route sales representative, a position he held for almost 15 years.

“For a while, it was enjoyable because it involved a great deal of interpersonal skills, collaboration and building solid work relationships,” he said. “After a while, I felt like a wheel spinning in place, not really going anywhere. I didn’t feel fulfilled or challenged in my work. It allowed me to earn a decent living but that was all.”

When his wife was six months pregnant with their second child, Smith rushed her to the hospital when she experienced excruciating pain in her abdomen. Exploratory surgery revealed that one of her fallopian tubes had twisted and become necrotic; it was nearly the size of a softball. Thankfully, everything turned out well, and it was during his wife’s recovery in the hospital and afterward that Smith began thinking about a new career.

“We saw nurses throughout the days, way more than any doctors,” he said. “Some of the nurses were kind, helpful, compassionate and caring. Other nurses were almost the opposite, seeming bothered to have to do anything for us, always being rushed to get out of the room as soon as they could. My wife was greatly affected by both types of nurses. The wonderful nurses helped improve her recovery in both body and spirit. The not-so-great nurses made her feel like a burden, like she shouldn't be asking for something to help ease her pain or that she was better off recovering at home.

“After leaving the hospital, I stayed at home with her to help her recover, because she had a huge incision from her belly button to her pubic bone – and she was pregnant! After that week, my wife told me that I did so well with helping her, that I was a great caregiver, much like the nurses who were helpful while in the hospital. She suggested that I should pursue nursing. After some thought, I realized that I wanted to have a positive, meaningful impact in the lives of people, that I enjoyed caring for others, that I felt fulfilled knowing that I had the ability to make a difference.”

Smith chose College of DuPage because his family had just moved to Winfield and he liked how close it was. His wife, an emergency room physician assistant, also heard from colleagues about the high quality of COD’s Nursing program.

For the first year, Smith took night classes after working long 13- or 14-hour days. After completing COD’s Basic Nursing Assistant (BNA) program, he applied to the Nursing program and was accepted.

“It was difficult but I finally had a career goal that would enable me to find satisfaction, comfortably support my family, and be an example of hard work and study for my children. It was worth every minute,” he said.

Smith appreciated the amount of guidance and support at COD, especially from the faculty.

“The nursing faculty were there to help guide me both academically and emotionally when I struggled or stumbled,” he said. “I am extremely grateful for the new program they started – Guided Study Group (GSG) – that helped me focus on the material and my studies so that I could be successful in the program. With the mountain of studying that the program requires, GSG helped me and many others really grasp the concepts of nursing. I have experienced wonderful clinical sites, explored many fields of nursing, and met people who may be good to know when I am applying for a nursing position.”

After graduating with honors with his Associate Degree in Nursing, Smith transferred to Benedictine University and then began his orientation in the ER at OSF in Rockford when COVID hit. Despite the stress of commuting to Rockford and completing his degree online, he graduated and then transferred to the ER at AMITA Health Alexian Brothers Medical Center in Elk Grove Village, where he has dealt with crisis caused by the pandemic.

“The past two years have been absolutely grueling,” he said. “Because COVID-19 greatly compounded the situations with already sick patients that hospitals see in the emergency department, patients are waiting longer than ever to receive serious medical attention. I have decided to pursue agency/travel nursing to help in hospitals with the greatest need.”

Smith encourages anyone interested in nursing to enroll at COD for the necessary tools to succeed.

“After being out of school for nearly 20 years, I was nervous about getting back into such an intensive program,” he said. “However, I need not have worried because the nursing faculty present the curriculum in a way that relates to the real world, not just referencing a book. The program constantly strives to give the students the best experiences available through wonderful clinical sites, a quality simulation hospital and teachers genuinely invested in their students’ success.

“I feel that I always will have a home at College of DuPage. The Nursing program helped fuel my passion for nursing and I am grateful that I began my journey at COD.”