From the Archives: Stickbomb Kinetics 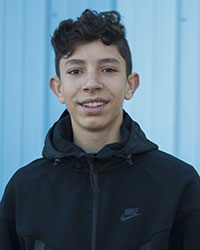 A stick bomb is a kinetic chain reaction created when popsicle sticks and linked and held together by tension. Stick bombs bring science, design, creativity and inspiration together. There is a lot of learning that happens from the success and failure of creating something like a stick bomb. In this presentation, Andre Jefferson will share how his love of stick bombs and parkour led to an understanding of kinetics. This talk was originally recorded as part of STEMCON 2017.

Andre Jefferson isn't just your average teenager. After discovering an interest in kinetics, he began constructing stick bombs—Popsicle sticks woven into a pattern in which the tension of the weave causes a chain reaction to occur where the sticks fly into the air. He posted a video on YouTube and has since become a bit of a celebrity, featured on Nickelodeon, CNN's Anderson Cooper, and TEDx Indianapolis. Andre has also become a fan of scientific websites, especially ones that show how things work. He is passionate about learning and understanding the world around him. The websites bring science to life for him with their videography, a topic in which he has great interest.

Suitable for: all ages