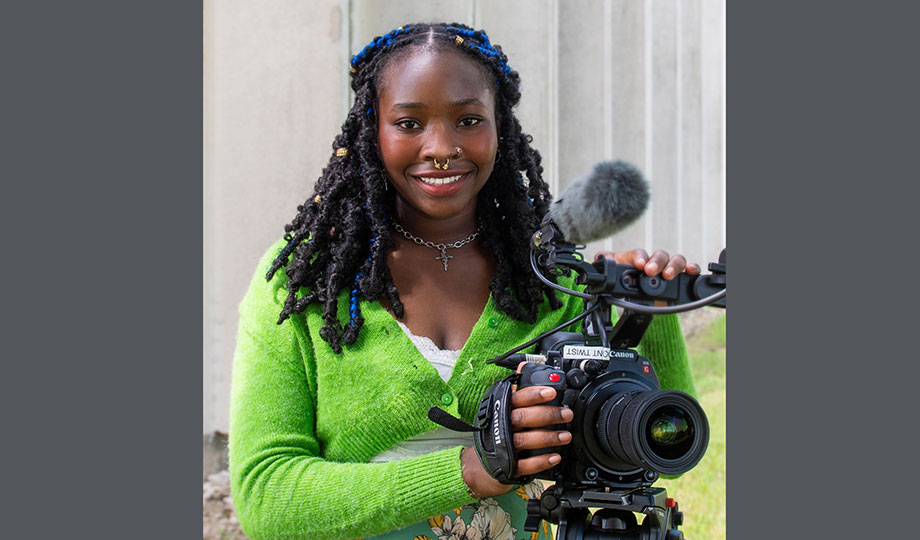 Dorcas Brou found herself at College of DuPage.

With a twin brother also going to college, she initially chose COD for its affordability. Her plan was to complete her general education requirements, earn an associate degree and transfer.

During her first semester, Brou took “Intro to Film Art” taught by Professor Marco Benassi and discovered her career path.

“It was in that class, as we watched ‘Whiplash,’ that I decided I had to follow my heart and pursue filmmaking,” she said. “I sat down with my mom to confirm my decision and reached out to meet with John Rangel, head of the Motion Picture/TV (MPTV) program, to complete this decision. Leaving my meeting with him, I felt excited about this new journey.”

In addition to developing her skills as a filmmaker, Brou was part of the Student Leadership Council, New Student Orientation, and the Inclusive Excellence Peer Mentoring Program.

“The leadership skills I gained at COD have built the leader I am,” she said. “I have been able to look at my strengths and weaknesses in several roles and can now carry this reference with me along the rest of my journey.”

Brou completed her Associate in Applied Science, graduated with highest honors and was recognized by MPTV faculty for excellence during COD’s annual Celebration of Academic Excellence. She is now pursuing a Bachelor of Fine Arts in Cinema at Southern Illinois University Carbondale. With a goal is to become a director and create narrative feature-length films, she would like to be based in Houston, Texas, and find sponsors to support her projects through film festivals.

In fact, she just finished production on her most recent project, “The Fight Inside,” a coming-of-age drama that follows Christian, a teenager addicted to drugs after losing his mother.

“The drugs offer Christian a way to momentarily forget his problems; however, after taking a larger-than-normal dose, he is forced to confront the deep scars of his past in a dream-like reality. The project is now in the post-production phase and is being edited. I am super-excited to get it finished and enter it into festivals this fall.”

Although she selected COD for its cost, Brou would not trade her experience for anything else.

“It was a pleasure to have spent my two years at COD, where I found out what I wanted to do,” she said. “With the help of mentors like John Rangel, Tony Venezia, Kristen Webster and an overall awesome faculty, I leave the program confident.

“I would recommend a community college first to anyone and everyone! To all incoming students: You must learn to drop the stigma of a community college and look at this as an opportunity to gain and be ahead of your peers after you transfer into a four-year university. At COD, you get to figure yourselves out with less to lose if you apply yourselves and utilize your resources. You will leave more than ready to tackle the big world of college rather than being thrown in as a freshman into a big sea of sharks and possible debt. And if film is something you'd like to pursue, waste no more time and enter the MPTV program at COD. I believe the program is really ahead of its competition in the Chicago area, with outstanding faculty who simply care for their students.”