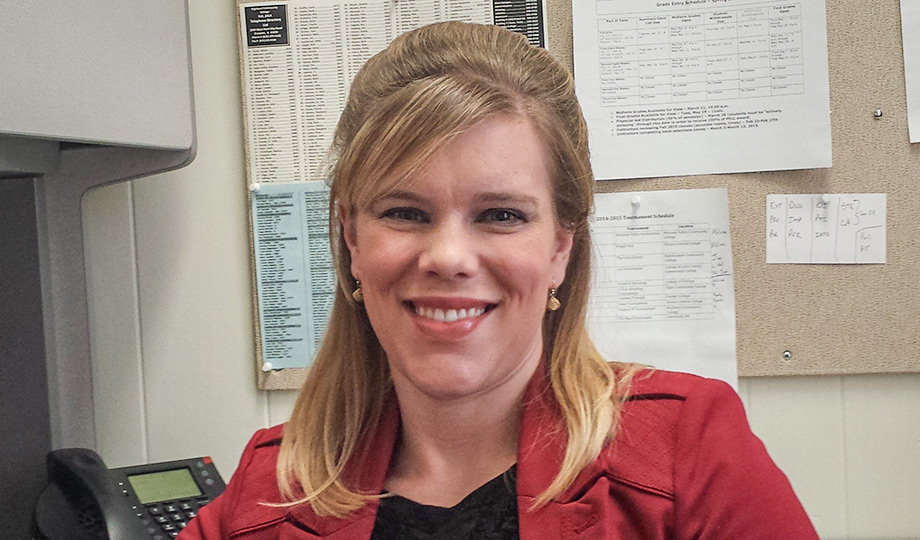 “I had taken some classes at COD beginning my senior year in high school, and I knew it was a wonderful school full of amazing professors,” she said. “I also based my decision on COD’s reputation for excellence and affordability. Moreover, I wanted to compete on the nationally recognized forensics team.

Entzminger, who was also part of the Honors Program, earned her Associate in Arts with honors and then transferred to Coe College in Cedar Rapids, Iowa, where she received a bachelor’s degree in Political Science and Speech Communication. While working at a law firm, Entzminger – who thought about becoming a lawyer – volunteered as a forensics coach and judge at COD and realized she wanted to teach.

She then earned her master’s degree in communication at Northern Illinois University and worked for several years as a speech instructor at Highlands Community College in Illinois and Bradley University. In 2016, she was nominated for and elected Regional Governor for Forensics.

“I really enjoyed seeing when my students were excited about a concept they just grasped,” she said. “Knowing that I helped my students become more articulate speakers who can explain their ideas, regardless of their major, got me up in the morning.”

Entzminger now works as the Director of Business Development and Marketing at Keith Engineering Design, a position that uses the skills she acquired through speech, debate and teaching. She is thankful that College of DuPage provided her with a solid foundation upon which she completed her bachelor’s and master’s degrees.

“If it wasn’t for the caring and dedicated forensics coaches and teachers, I wouldn’t be where I am today,” she said. “The education I received at COD went beyond what was taught in the classroom. I learned how to become an advocate for what I believe in and how to express my ideas in an articulate manner.

“I would encourage students to attend COD and the Speech Communications program because of the dedication of the professors and their willingness to answer questions. This creates an atmosphere with the accessibility of a smaller school while having the amenities of a large school. I would advise them not to wait but to take the speech communications classes and to get involved in the forensics team. As a part of that team, I made friends for life. I was also able to compete and travel to competitions to speak about subjects for which I have a passion.”

More about the Speech Communications program