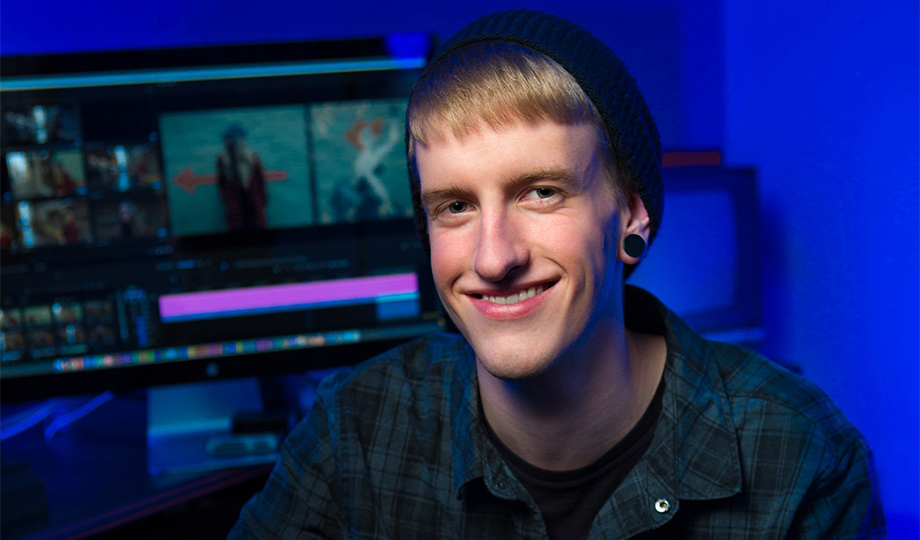 Matt Miltonberger credits his father for his pursuit of a film production and animation career.

“I started getting into film and making videos seriously when I was in eighth grade,” he said. “I would make short little films with my friends and put them on YouTube. When I started getting into actual production more seriously in early high school, I worked with my Dad and we produced the corporate videos for his business. He always pushed me and had an interest in every hobby and passion I had, especially film. My Dad knew it was something I had a knack for and constantly supported me, making me a better filmmaker.”

Miltonberger initially took College of DuPage dual credit courses while in high school, and he didn’t want to go anywhere else.

“I couldn’t afford to go to a four-year college, and honestly, COD is one of the greatest community colleges in the nation,” he said. “I knew I would receive the academic courses and support that I wanted and my debt wouldn’t be anything compared to attending a four-year college.”

Miltonberger received a hands-on educational experience in the Motion Picture/Television program and was constantly learning new aspects of film, animation and TV news. One of his best experiences was taking the Commercial Video Production summer class with his twin sister, Amy.

“In this class, you have an actual client and you produce a commercial or promotional video for their company,” he said. “It was one of the most ‘real world’-like experiences that I’d had so far, and it really taught me about the work flow in the corporate production world.”

Miltonberger initially wanted to be a cinematographer or camera operator, and he dabbled in other areas in hopes of running his own freelance production company. After his first semester, he changed his mind and now wants to be a motion graphic animator.

He credits his instructors and their experiences working in the industry for influencing his decisions.

“My animation teacher, Tony Venezia, was the one who guided me and made me realize how much I truly love animation and how much I enjoy learning about it. Tony is like a mentor to me and has been throughout my COD career,” he said. “My editing teacher, John Rangel, was the one who helped me realize that I love editing. Rangel pushed me to become better every day as the professor for my Advanced Film Production class.

“Honestly, all of the instructors at COD just kept pushing me past my comfort zone. It’s OK to try something completely new where you have to work incredibly hard in order to learn how to make it work, or it’s completely OK to try something new and fail. Either way, you’re trying something that you’ve never tried before, and that’s really how you learn. I feel like my professors are preparing me as much as they can for the real world and they do a fantastic job.”

In 2016, he and several other MPTV program students interned for a small local production company that produced a political satire news show called “WTF News America.” After two days of working on graphics, it was clear the show needed full-time employees, so Miltonberger was hired full-time editing the show and producing all the motion graphics for the entire pilot season. That fall, the same production company hired him to edit a feature film called “A Chance in the World,” which was submitted to the Sundance Film Festival.

“Editing the feature was an unbelievable experience because I was faced with so many things that I had never experienced, such as working with 4k footage, having a proper workflow for editing a feature film, and working under an unbelievably tight deadline to try and make the Sundance submission,” he said. “The fact that I have edited a full feature film on my own at this age is kind of unreal. Most people don’t get the opportunity until being out of school for a few years.”

He then produced a nine-minute animated infographic “Climate Change: We Are the Problem and the Solution,” which was shown during COD’s annual Animation Night.

Miltonberger earned his Associate in Applied Science in Film/Video Production and initially decided to freelance, producing animated instructional/procedural videos for an orthodontics company. However, he decided to return to school and pursue a bachelor’s degree in Cinema Art and Science at Columbia College, focusing on motion design.

“Education was always important to my Dad, who passed away when I was 18 after a four-year battle with cancer,” he said.

During a job fair at Columbia, Miltonberger landed a summer internship as a 3D design intern with TracyLocke, an advertising agency in Chicago that focuses on retail product, ad and packaging design for clients such as SC Johnson and Kellogg’s. He worked on projects with the senior 3D designers and was the sole 3D designer on a number of projects for SC Johnson like Glade, Ziploc, Raid and OFF! and for Kellogg’s with Pringles, Rice Krispies and Pop-Tarts.

His next internship was at Sarofsky, a video production and motion design studio renowned for main title design work on several Marvel movies, including “Avengers: Infinity War,” and 2D/3D design and animation, live action, editing, and visual effects for advertising. After graduating with his bachelor’s, Miltonberger was hired by Sarofsky.

“Being at Sarofsky has been the greatest experience of my career so far,” he said. “I have learned more from my peers than I could ever have imagined.”

In 2019-2020, he was a lead 3D animator and compositor on a nearly year-long project to create the title sequence for the FITC (Future of Innovation, Technology and Creativity) international conference. Every year, one company or artist is selected for this honor, and Sarofsky was asked to produce the sequence, which was “What You May Find: FITC x Sarofsky.”

Wherever his career takes him, Miltonberger recommends both College of DuPage and the MPTV program to any student.

“I truly love COD,” he said. “It is a fantastic school and the MPTV program is phenomenal. A lot of people look down on community colleges in general, but honestly, going to a community college was the best decision I made academically and financially. All of the instructors in the program are just incredible people who love the art of film and media. I feel like I learned so much from this program and from my time at COD.”